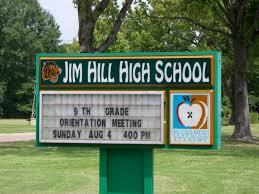 JACKSON, Mississippi (AP) — School officials say they will seek to fire a teacher who body-slammed a student into the pavement outside a high school.

It shows a Jim Hill High School teacher picking up a student and throwing the student to the ground.

Sophomore Tahj Young, who shot the video, says the student was crying and bleeding from his mouth afterward. Authorities say the student wasn’t seriously injured.

The Mississippi Link Newswire   The Royal Coronation of Isaiah Rush and Jazstiny Jackson, Mister and Miss Jim Hill High School, was held Tuesday, September 29, at 10 a.m. in the school’s auditorium at 2185 […]

Winter at the Hill

ByJackie Hampton Publisher The Jim Hill High School Department of music presented a Christmas Concert titled “Winter at the Hill”. It was held Sunday in the school’s auditorium at 5:00 p.m. Morgan Bridgeman, a junior […]