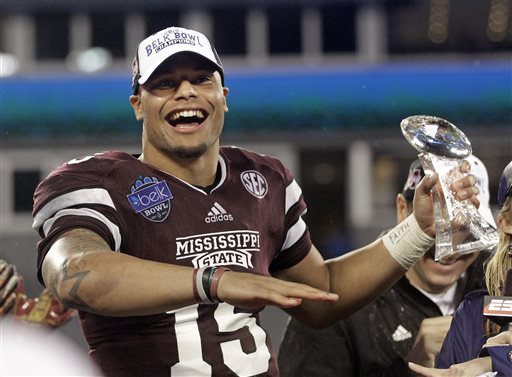 CHARLOTTE, N.C. (AP) — Dak Prescott was determined to put an exclamation point on his impressive career at Mississippi State.

He did just that Wednesday.

Prescott threw for a Belk Bowl-record 380 yards and four touchdowns on a rain-soaked field in Mississippi State’s 51-28 victory over North Carolina State.

“I wanted to make sure the last time I was wearing maroon and white that people remember me as a winner,” Prescott said.

Selected the game MVP, Prescott completed 25 of 42 passes and ran for 47 yards joining Colin Kaepernick, Tim Tebow, Dan LeFevour as the only players in FBS history to throw for 9,000 yards and run for 2,500 yards in their career.

“There aren’t words to describe what he has done for this program,” Mississippi State coach Dan Mullen said. “He has taken a university and a football program and changed the way people think about it. That’s pretty unique. I’ve coached a lot of good football players, and I hate comparing guys, but he could very easily be the best guy I’ve ever coached.”

That’s some high praise from Mullen, who was Tebow’s offensive coordinator at Florida.

Prescott threw two touchdown passes to Brandon Holloway in the second half to break it open for the Bulldogs, who finished the season 9-4 after being picked to finish last in the SEC West in the preseason poll.

North Carolina State’s Jacoby Brissett threw for one score and ran for another, but had two early interceptions that led to Mississippi State’s first 14 points.

Brissett had only thrown four interceptions all season coming into the game.

“I thought going into the game the turnover margin would be in our advantage,” said Wolfpack coach Dave Doeren. “But turning our twice in the first quarter flipped what we thought would be our strength.”

The Bulldogs led 31-14 at the half before Prescott put the game away.

He lobbed his third TD pass of the game to Holloway over a blitzing defense to put the Bulldogs up 37-21 late in the third quarter. The senior quarterback hit Holloway in stride on a go route along the right sideline for a 55-yard touchdown in the fourth quarter.

On the first play from scrimmage, defensive end Jonathan Calvin hit Brissett as he released the ball and linebacker Gerri Green came up with the diving interception on the slick field at the Wolfpack 26. Five plays later, Ross hauled in a pass from Prescott in the left flat, turned up the left sideline and raced 14 yards for a score.

Brissett had another pass picked off later in the first quarter and Prescott capitalized by finding Wilson for a 28-yard scoring strike. Mississippi State made it 21-0 when Ross scored on a 33-yard reverse.

“We can’t do that to start the game,” Brissett said.

Added Doeren: “The two picks were not normal for him. … We had some guys open and he didn’t have a chance to find them. They did a good job pressuring him and we didn’t do a very good job protecting him at times.”

Brissett did battle back.

He hooked up with former defensive end Pharoah McKever on an 82-yard scoring strike on a blown coverage to get NC State on the board, and Jaylen Samuels raced 46 yards for a touchdown to trim the lead to seven. But that was as close as the Wolfpack would get.

The Bulldogs made it a two-possession game when left guard Justin Malone bent over to pick up a loose ball in the end zone after Prescott fumbled on a quarterback draw.

Doeren believes a young Wolfpack (7-6) team has a bright future.

“There’s two things that happen: You have struggle in your life and then you deal with struggle,” he said. “I told them I’ve been through this and the first thing that you do is you stick together as a family.”

NORMAN, Mississippi (AP) — John Gibbs Jr. threw for three touchdowns and rushed for another and Alcorn State coasted to a 40-25 win over Texas Southern on Saturday. With Gibbs running the offense to perfection, […]

HOUSTON, Texas (AP) — Dray Joseph hit Lee Doss for a 16-yard touchdown pass to give Southern University a 34-27 double overtime victory over Jackson State Saturday in the Southwestern Athletic Conference Championship. During the […]

chopsports Former standout wide receiver Emmanuel Arceneaux will be the Keynote Speaker for the Braves Breakfast of Champions event Thursday, April 19, on the campus of Alcorn State University. The event is designed to honor […]