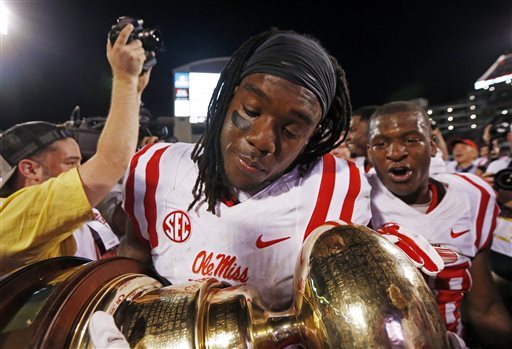 Mississippi State dropped out of the Top 25 after earning No. 23 ranking a week earlier.

Oklahoma moved up to No. 3 behind Clemson and Alabama and the Big Ten placed three teams in the top six of the new AP poll.

Clemson is No. 1 for the fourth straight week and Alabama is No. 2. The Tigers received 53 first-place votes and the Crimson Tide got the other eight from the media panel.

The Sooners jumped two spots to after winning the Big 12 title with a 58-23 victory at Oklahoma State on Saturday night.

Three Big Ten teams followed with Iowa at No. 4, Michigan State No. 5 and Ohio State No. 6.

Stanford moved up six spots to No. 7 after beating Notre Dame with a last-second field goal and the Fighting Irish dropped from fourth to ninth.

Oklahoma has its best AP ranking since the 2011 season, but this one is far more satisfying for the Sooners.

In ’11, Oklahoma was preseason No. 1 and steadily slipped as the season went along. The Sooners were No. 3 in October, dropped as far as No. 19 in the poll after the conclusion of the regular season and finished 16th.

This season Oklahoma started 19th, moved up a bit before losing to Texas in October and slipping back to 19th and has steadily climbed since.

The Big Ten has three of the top six teams in the rankings for the first time since the final regular season poll of the 2006 season, when Ohio State was No. 1, Michigan was third and Wisconsin was sixth.

The bowl season did not go well for the Big Ten’s heavyweights. Ohio State lost to Florida in the BCS championship game, 41-14, and Michigan was beaten 32-18 in the Rose Bowl by Southern California.

Wisconsin won the Capital One Bowl 17-14 against Arkansas.

Five conference championship games, including all four of the Power Five leagues that have them, will match ranked teams.

No. 4 Iowa vs. No. 5 Michigan State, Big Ten championship in Indianapolis

No. 18 Florida vs. No. 2 Alabama, SEC championship in Atlanta

No. 7 Stanford vs. No. 24 Southern Cal, Pac-12 championship, at Santa Clara, California

No. 20 Temple at No. 17 Houston, American Athletic Conference championship in Houston.

No. 1 Mississippi State back to work with ‘a target on our back’

October 22, 2014 Online Editor Sports Comments Off on No. 1 Mississippi State back to work with ‘a target on our back’

STARKVILLE, Mississippi (AP) — Mississippi State has spent the past month obliterating stereotypes about the program, ignoring a mediocre history and rising to the top spot in the national rankings for the first time in […]

Manny Diaz to be new defensive coordinator at Mississippi State

The Associated Press A person familiar with the decision says that Mississippi State has hired Manny Diaz to be its new defensive coordinator. Diaz replaces Geoff Collins, who left the program in December to become […]

OXFORD, Miss. (AP) — The NCAA has ruled that Mississippi left tackle Laremy Tunsil can return to the field on Saturday against No. 15 Texas A&M after a seven-game suspension for receiving improper benefits. That […]