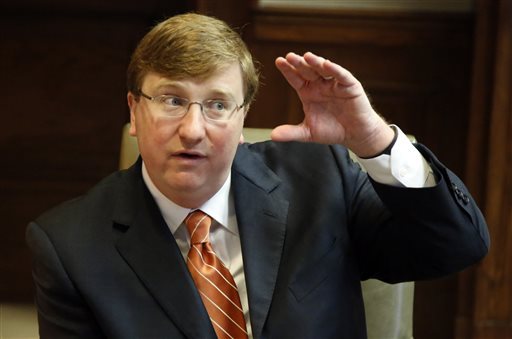 Republican Lt. Gov. Tate Reeves gestures during a discussion about Mississippi voters rejecting a school funding proposal on Tuesday’s ballot, during a sit down with reporters in his office at the Capitol in Jackson, Miss., Wednesday, Nov. 4, 2015 following yesterday’s general election. Reeves said he is willing to put more money into efficient school systems that demonstrate strong academic performance. (Rogelio V. Solis/AP Photo)

The comments by Lt. Gov. Tate Reeves and House Speaker Philip Gunn came a day after voters defeated Initiative 42, a citizen-sponsored education proposal that would have allowed people to sue in chancery court if school funding falls short.

GOP leaders — including Reeves, Gunn and Gov. Phil Bryant — had argued that 42 would give a judge too much power over the entire state budget.

Supporters of Initiative 42 said they are not giving up their fight to fully fund the Mississippi Adequate Education Program, a formula that has been fully funded only two years since it was put into law in 1997. The formula is designed to give school districts enough money to meet midlevel academic standards.

Gunn said the formula is not working.

“It’s a constant source of conflict and dispute,” Gunn said. “We need to find a way where the school systems can get what they need and in some way that doesn’t result in an argument every year.”

Reeves and Gunn said in separate interviews that they’re willing to put more money into efficient school systems that demonstrate strong academic performance. Reeves said school funding should be based on what is spent in top-performing districts, not what’s spent in midlevel districts. However, critics have said that revamping the education program could hurt districts with struggling local tax bases, which often face higher expenses of educating children from impoverished backgrounds.

Dick Molpus, who owns a timber company and is a Democratic former secretary of state, spent at least $200,000 to push Initiative 42. He said more than 300,000 people voted for the proposal, and they could press lawmakers in 2016 to fully fund the formula. Molpus said an up-or-down vote on funding would remove Republican objections over judicial oversight and loss of legislative autonomy.

“They’re worn out and tired today, but they’re still energized,” Molpus said of 42 supporters. “They really don’t want their children to receive an education that isn’t competitive.”

Although Reeves campaigned to defeat 42, he praised the initiative’s supporters.

“There were an awful lot of really good Mississippians that worked really hard to pass Initiative 42. And the reason they worked so hard is because they believe in public education,” Reeves said. “Those people are not our enemies. In fact, they are our friends.”

Grant Callen is founder and president of Empower Mississippi, a group that opposed 42 and supports programs that could steer public money into private schools. He said that the defeat of 42 opens the way to changes to the Mississippi Adequate Education Program “to make sure increased spending is actually getting to the classroom and not going to administration and overhead.”

“If you have a formula that sets such a high bar that we can’t meet it even when revenues are up, then something is wrong with the formula,” Callen said.