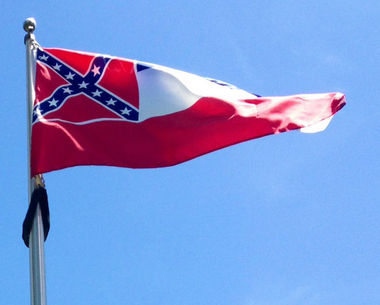 OXFORD, Miss. (AP) — The University of Mississippi quietly removed the state flag from its place of honor on Monday, heeding the calls of those who say the banner’s Confederate battle emblem is harming the school’s future.

Interim Chancellor Morris Stocks waited until the flag was gone before announcing he had ordered it taken down and sent to the university’s archives. Campus police officers furled it from the flagpole where it flew under the U.S. flag, between the white-columned administration building and a marble statue of a saluting Confederate soldier.

Days earlier, the student and faculty senates voted to urge its removal from the Oxford campus, a bastion for Southern elites since its founding in 1848. A group of university leaders then met Sunday night and agreed to take it down.

“Because the flag remains Mississippi’s official banner, this was a hard decision. I understand the flag represents tradition and honor to some. But to others, the flag means that some members of the Ole Miss family are not welcomed or valued,” Stocks’ statement said.

The flag has flown for years in the Lyceum circle. That’s where deadly white riots broke out in 1962, when James Meredith was enrolled as the university’s first black student, under a federal court order and with protection from a phalanx of U.S. marshals.

Today’s students forced this issue as the governor and most state lawmakers seek re-election on Nov. 3, and many politicians have avoided staking positions. Not so Chris McDaniel, a state senator who lost a contentious Republican primary to U.S. Sen. Thad Cochran in 2014, and insisted that “Ole Miss should fly it, as long as they remain a publicly funded university.”

“Universities are supposed to be marketplaces of ideas, not cocoons designed for coddling the feelings of the perpetually offended,” the tea party favorite posted Monday on his Facebook page.

Mississippi House Speaker Philip Gunn said months ago that it’s time to change the flag, but his fellow Republican, Gov. Phil Bryant, declined to call a special legislative session to debate it and said Mississippians themselves should to decide the flag’s future.

Since 1894, the Mississippi flag has had the Confederate battle emblem in its upper left corner — a blue X with 13 white stars, over a field of red. State voters decided in 2001 to keep it there, the last state flag in the nation to incorporate the divisive symbol.

The catalyst for decisions by the school’s student, faculty and administrators to endorse its demotion was a remove-the-flag rally on Oct. 16, organized by the university’s NAACP chapter.

“I think college students react a lot emotionally,” the governor said after the student senate vote.

He held his ground on Monday.

“Mississippians overwhelmingly voted in 2001 to adopt the current Mississippi state flag. I believe publicly funded institutions should respect the law as it is written today. It clearly states ‘The state flag shall receive all the respect and ceremonious etiquette given the American flag,'” Bryant said in a statement.

Complaints that the Confederate battle flag symbolizes white dominance more than Southern heritage have risen nationwide since the June massacre of nine black worshippers inside their church in Charleston, South Carolina. Police called it a racially motivated attack, by a white man who had posed with Confederate flags.

The University of Mississippi has struggled with Old South symbolism for decades. Sports teams remain the Rebels, but the Colonel Rebel mascot was retired, and fans mostly stopped waving Confederate battle flags after sticks were banned in the stadium.

Chancellor Dan Jones was ousted in March after intensifying efforts to make the campus more racially inclusive. Thousands rallied to support him amid speculation Jones was too liberal on race for the College Board. The trustees, who are appointed by the governor, denied that, saying the only reason involved financial changes needed at the university’s hospital.

The flag came down just ahead of Thursday’s campus visit by the board’s choice to replace Jones — University of Kansas Provost Jeffrey Vitter — who told The Associated Press in an interview last week that he is committed to diversity, but offered no opinion on the flag.

Athletic director Ross Bjork, who has said the flag makes recruiting more difficult, was part of a leadership team that met with the interim chancellor over the weekend and praised his decision to remove it.

“I’m just proud our university can take a stand like this. It’s the right thing to do. It helps move us forward,” Bjork said.

Football coach Hugh Freeze said removing the flag “is the right thing for this university, and hopefully our state also will follow suit. I think it represents adequately our core values of what we want to be.”

NEW ORLEANS (AP) — Mississippi’s Chad Kelly was throwing touchdown passes and Laquon Treadwell was catching them in the Sugar Bowl on Friday night. No surprise there. But that touchdown run by 305-pound left tackle […]

CHARLOTTE, North Carolina (AP) — Carolina Panthers Pro Bowl defensive end Greg Hardy has been arrested on misdemeanor charges of assault on a female and communicating threats, according to Charlotte Mecklenburg police. Police said in a […]

Smokers on the University of Mississippi campus have received their last warning.