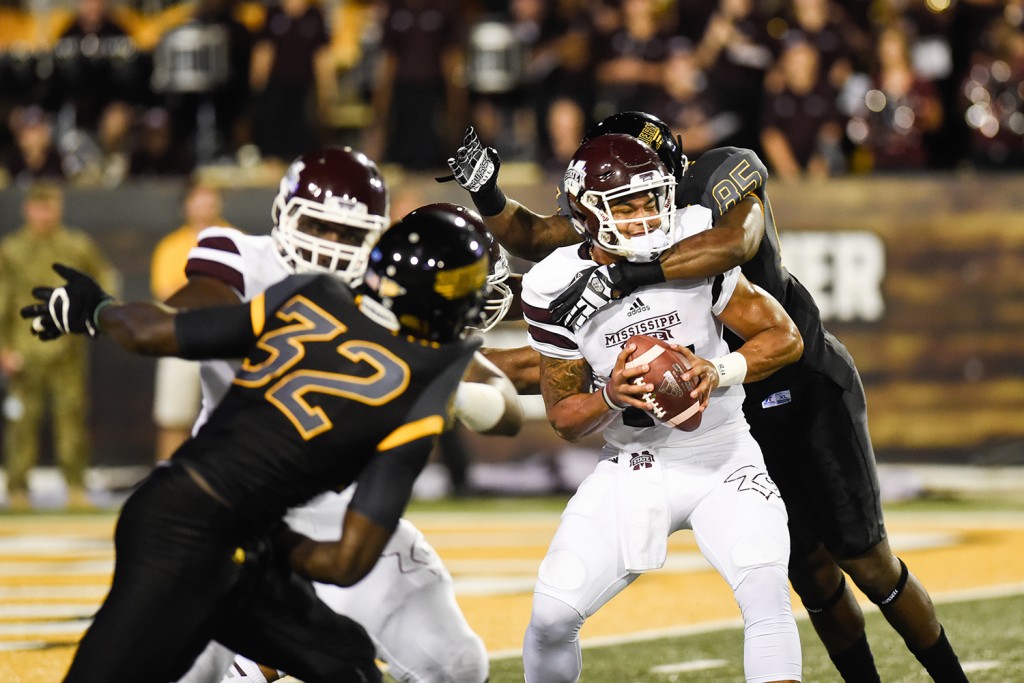 HATTIESBURG, Miss. (AP) — Mississippi State would love to limit how much quarterback Dak Prescott runs the football in order to keep him healthy all season.

It sounds good in theory.

The problem with that strategy is Prescott is really, really good at running the football. And Mississippi State’s offense didn’t look like itself until Prescott took the game, and the ball, into his own hands.

Prescott threw two touchdown passes and ran for another score to lead Mississippi State over Southern Mississippi 34-16 on Saturday night.

The Bulldogs led just 14-10 at halftime, but the 6-foot-2, 230-pound Prescott’s 49-yard run early in the third quarter was a crucial play during one touchdown drive and his 7-yard touchdown run in the fourth quarter sealed the hard-fought victory.

“We played good at times, we played bad at times,” Prescott said. “But it was game one and we’re finally playing against someone that wasn’t ourselves.”

It was a strange, sometimes disjointed game that had several big special teams plays, including a 100-yard kickoff return for a touchdown by Mississippi State’s Brandon Holloway.

“This had a bit of everything, right?” Mississippi State coach Dan Mullen said. “It kind of had it all. It had onside kicks, it had a blocked punt, it had fumbled special team plays, goal line stands, big long runs and a kickoff return for a touchdown. You name it, it had it in this game.”

It was a tighter-than-expected outcome considering Southern Miss had a 4-32 record over the last three seasons and lost 49-0 to the Bulldogs last season in Starkville.

But Mississippi State had two crucial first-half turnovers that helped keep Southern Miss in the game. The Golden Eagles were hosting a Southeastern Conference opponent for the first time since 1989.

Prescott completed 22 of 38 passes for 237 yards and also added 72 yards rushing, including a 7-yard touchdown.

Nick Mullens led Southern Mississippi with 311 yards passing and a touchdown, but the Golden Eagles bogged down several times in the red zone, settling for field goals instead of touchdowns.

While Southern Miss was sputtering, Mississippi State’s offense took off when Prescott started to run.

His 49-yard sprint down the right sideline was the crucial play in a drive that ended with a 4-yard pass to Gus Walley for a touchdown. His 7-yard touchdown run was right up the middle and allowed Mississippi State fans to relax after some uneasy moments.

Southern Miss announced a stadium-record crowd of 36,641. The Golden Eagles were able to keep things interesting for a while.

Some early Mississippi State blunders were crucial to producing the tight halftime score.

The Bulldogs’ new starting running back Ashton Shumpert looked like he was about to score a touchdown but fumbled at the 1. A little later, Fred Ross made an ill-advised attempt at catching a bouncing punt and it smacked off his hands before being recovered by Southern Miss.

The Bulldogs were able to weather those miscues — partly thanks to Holloway’s touchdown on the kickoff return — and slowly pull away in the second half. Southern Miss managed just two field goals after halftime.

STARKVILLE – (AP) Mississippi State and Baylor have agreed to cancel the two remaining basketball games in its contract. The Clarion-Ledger reports Baylor was scheduled to visit Starkville in November before the Bulldogs traveled to […]

Mississippi State stays No. 1, Ole Miss drops to No. 7 and other poll tidbits

October 27, 2014 Online Editor Sports Comments Off on Mississippi State stays No. 1, Ole Miss drops to No. 7 and other poll tidbits

The Associated Press Breaking down the ballots for the AP Top 25 and wrapping up college football’s ninth weekend. ___ YOU MAKE THE CALL Mississippi beat Alabama at home but lost to an LSU team on the road […]