Lewis had come under criticism as flaws in the detention center design and staffing came to light.

Mason has 32 years of law enforcement experience, including with the Jackson Police Department, the Hinds County Sheriff’s Department, the FBI, and as an investigator with the state attorney general’s office.

The Greenwood Commonwealth reports Carver was defeated in Tuesday’s Democratic Party primary by Clint Walker. The 41-year-old Walker was making his first run for public office.

Walker has worked as an agent with the Mississippi Bureau of Narcotics since 2001. He took a leave of absence to run for sheriff.

Entergy Mississippi users to get bill credits for 6 months

JACKSON, Miss. (AP) – Entergy Mississippi customers will get a refund over the next six months thanks to lower natural gas prices.

The Mississippi Public Service Commission Thursday approved a plan for Entergy to issue $46 million in bill credits to customers beginning in September and ending in February.

Entergy spokesman Joey Lee says the company can’t predict whether the decrease will continue in its next fuel purchase plan.

JACKSON, Miss. (AP) – The Mississippi Supreme Court has let stand the state’s approval of a plan by Harrison HMA, owners of Gulf Coast Medical Center, to build a hospital in Biloxi.

The Mississippi Department of Health issued a certificate of need for the project in 2012. Mississippi requires a CON in a process designed to avoid duplication of health care services and control costs.

The CON was challenged by Singing River Health System, Memorial Hospital at Gulfport and Garden Park Medical Center. A Hinds County judge upheld the CON in 2013.

The three hospitals argued Harrison HMA was building a new hospital not replacing or relocating an existing hospital.

The state Court of Appeals upheld the CON last year.

JACKSON, Miss. (AP) – The Mississippi Supreme Court has upheld the conviction of a Lucedale man in the death of the sheriff of George County.

Christopher Lee Baxter was seeking a new trial in the death of Sheriff Garry Welford. Welford was struck by a pickup truck in which Baxter and his girlfriend, Brandy Nicole Williams, were fleeing from authorities on July 21, 2010.

Welford was putting spikes at an intersection near the Alabama line to stop the truck and end a high-speed chase when he was struck.

The Supreme Court, in its 6-2 ruling Thursday, denied Baxter’s challenges to instructions given the jury and to the evidence in the case. 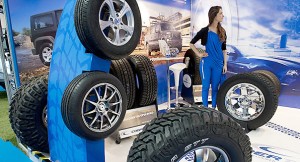 The project will add 14,000 square feet to the southeast side of the manufacturing facility.

Company spokeswoman Anne Roman tells the Northeast Mississippi Daily Journal that the company has been reconfiguring its manufacturing plants to help meet evolving consumer needs, such as more premium tires for every day drivers

Cooper employs some 1,600 workers in Tupelo.

Roman says the company is installing an auto-compounder, which automates the rubber-mixing process. The addition at the plant will make room for the new equipment.

Roman says no additional jobs are tied with to the expansion.

MCCOMB, Miss. (AP) – Police in McComb are investigating the shooting death of a 9-year-old boy.

Coroner Percy Pittman tells media outlets that Jadurius Wilkerson was pronounced dead of a gunshot wound to the head just after midnight Thursday.

Detective Sid Boyte says in a news release that police received the call at 10:44 p.m. Wednesday that there was a shooting. Boyte says the boy was unresponsive at that point and rescue workers were unable to resuscitate him.

Boyte says a man was arrested at the scene and charged with possession of a firearm by a convicted felon. The man is also being held on a warrant for probation violation through the Mississippi Department of Corrections.

The 6-foot-4, 285-pound Foster was waived with a “failed physical” designation. He joined the Saints as an undrafted rookie out of Illinois in 2013 and had three sacks in 12 games that season. Last season, he did not have a sack in five games and finished the season on injured reserve with a knee injury.

He had not practice at all this offseason and began training camp on the physically unable to perform list.

Manning is an undrafted free agent out of Northwest Missouri State who had tryouts in rookie camps with the Dallas Cowboys, Kansas City Chiefs and was later signed by the Green Bay Packers, but released shortly afterward.

May 15, 2015 Online Editor News Comments Off on Mississippi Latest News

MISSISSIPPI GOVERNOR-SUPERMAN Bryant tells grads there is a ‘bit of Superman in us all’ POPLARVILLE, Miss. (AP) – Mississippi Gov. Phil Bryant is encouraging community college graduates to find their inner superhero. The Sun Herald […]

GRADUATION CHARGES School official presses charges for cheering at graduation SENATOBIA, Miss. (AP) – Can cheering be criminal? One Mississippi school superintendent says yes, and he swore out charges against three people for doing it. […]

NEW ORLEANS (AP) – Opening statements could begin soon in the complicated case of thrice-widowed Emma Raine. She’s on trial in the death of her second husband in New Orleans 2006. And that case is […]