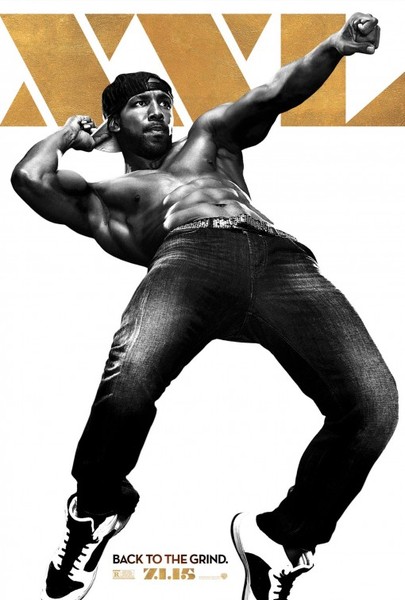 Born in Montgomery, Alabama on September 29, 1982, Stephen Boss was always spinning and staying in motion as a child, which is how he earned the nickname “tWitch.” After studying dance at Southern Union State Community, he made his Hollywood debut in Season 3 of the reality TV series “So You Think You Can Dance” and was runner-up in the Finals in Season 4.

He parlayed that television success into a film career, appearing in Hairspray, Blades of Glory, Stomp the Yard 2 and, most notably, several installments of the Step Up franchise: Step Up Revolution, Step Up: All in, and Step Up 3D. And since April of 2014, he has been featured on “The Ellen Degeneres Show” as a guest DJ.

tWitch is married to his “So You Think You Can Dance” co-star, Allison Holker.

Here, he talks about his latest outing opposite Channing Tatum and Jada Pinkett Smith in Magic Mike XXL.

Kam Williams: Hi tWitch, thanks for another interview.

KW: So, what interested you in Magic Mike XXL?

StB: I had never worked with anybody doing the film before, which was great. And then when I heard that they were doing a sequel, I just put it out there that I was going to be a part of it. And I was excited.

KW: Editor/Legist Patricia Turnier asks: How would you describe the character you are portraying?

StB: Malik is the guy that kind of inspires Mike to mind his p’s and q’s in order to be able prove that he’s still a top notch dancer.

KW: How do you prepare differently to play a stripper than to play the street dancer in Step Up or the fraternity step dancer in Stomp the Yard 2?

StB: Well, a lot of it has to do with the choreography. Once you’re on set with the extras who are ready to throw dollars and excited that you’re actually taking your shirt off it’s pretty easy to get into character. Our choreographer, Alison Faulk, helped tremendously to make sure we were still bringing it.

KW: When you’re cast alongside so many other great dancers, what do you have to do to stand out and put your personal mark on a movie?

StB: Honestly, by just getting down the only way that I can, which I think I did with my first solo team. That was basically me free-styling. And when I free-style, that’s just the way that I dance. Nobody else dances like that. So, I thank that’s enough, doing me to the fullest.

KW: What message do you think people will take away from the film?

StB: [Laughs] It depends on what message you are open to taking. There’s the underlying buddy theme to this film about taking a road trip with your boys for your last hurrah, and having a good time and being open for anything. There are a lot of unexpected twists and turns and relationships formed due to unforeseen circumstances that actually work out for the better.

KW: Sangeetha Subramanian says: Twitch! Great seeing you with your wife on the finale of Dancing With The Stars last season. How do you make your schedules work, since you are both in the entertainment industry?

StB: Well, we just make it work. It’s a day-to-day process. Sometimes, we’re like ships passing in the night. But on a lot of other occasions, we’ve been fortunate to wrap projects at the same time. When she finished “Dancing with the Stars” this past season, it just so happened she wrapped the same day as “The Ellen Show.” So, both of us then had a couple of weeks off together. So far, it’s been great! It’s been working out.

KW: Harriet Pakula-Teweles says: We all got nicknames when we were young. How do you feel about keeping yours?

StB: I don’t mind it at all, because it’s a part of my being. It’s become part of my persona, when it comes to dance.

KW: Kevin Curran says: The teacher in me wonders whether the “tWitch” activity level for which you were nicknamed persists to this day? Was it ever a problem for you in school, or was it possibly an asset?

StB: It was definitely a problem in school, but it was an asset, for sure. And yes, I continue to dance quite a bit and it remains very hard for me to sit still today, especially when music is playing. I had trouble in school because I didn’t want to focus. Honestly, I would have rather been dancing.

KW: Kevin also asks: What do you see as the ideal trajectory for where you would like your career to go from here: mostly dance, mostly acting, or a continuation of both?

StB: I would prefer mostly acting, but I would like to still like to be in the dance world, as well. I’ve been studying acting in preparation for the next opportunity where a role comes along that isn’t attached to a dance component. When it comes to dance, TV shows like “So You Think You Can Dance” and “Dancing with the Stars,” give you a platform to start and expand a dance business beyond your physical likeness, meaning I don’t necessarily have to be there for the operation to flourish.

KW: How have you enjoyed being a guest DJ on Ellen? Do you really pick the music, or just play it?

StB: It’s so much fun. I pick the music but, of course, Ellen has her say in terms of what she wants to hear. We have an incredible time. If you come to a taping of the show, you’ll see how much fun it is.

KW: David Roth asks: How come they missed you when they cast Chocolate City?

StB: [LOL] Because they cast me in Magic Mike XXL.

StB: I don’t know the answer to that question, but I’m sure there is one.

KW: What is your guiltiest pleasure?

KW: The Uduak Oduok question: Who is your favorite clothes designer?

StB: When it comes to fashion, I really enjoy sneakers. So, I’m going to have to say Jordans.

KW: The Mike Pittman question: What was your best career decision?

KW: Was there a meaningful spiritual component to your childhood?

StB: Yes there was, for sure. I was raised religious, for the most part, which came with a spiritual component that has continued. So, I’ve always had spirituality around me.

KW: The “Realtor to the Stars” Jimmy Bayan’s question: What’s your dream locale in Los Angeles to live?

StB: I would have to say Malibu.

KW: The Anthony Mackie question: Is there anything that you promised yourself you’d do if you became famous, that you still haven’t done yet?

StB: Yes, to build a community center in my hometown, Montgomery, Alabama.

KW: What’s it like to be from Montgomery, a city with so much history in terms of the Civil Rights movement?

StB: Its history is very deep, and I’m so grateful to be from there. It really helps me in my day-to-day life. It helped me establish my vales, my base of who I am and how I feel about things..

KW: When I was growing up, you used to see Montgomery on TV all the time.

KW: What was your very first job?

StB: Working at a restaurant called Flip Burger. I lasted a grand total of about two weeks.

KW: The Tasha Smith question: Are you ever afraid?

StB: As an artist? Of course there are times when I’m afraid. But the trick is not letting fear dictate my every move.

KW: The Michael Ealy question: If you could meet any historical figure, who would it be?

KW: What’s in your wallet?

StB: I[Chuckles] My license, my credit cards, and pretty much every business card I’ve ever been handed. I’ve got a George Costanza [from Seinfeld] wallet.

KW: Thanks again for the time, tWitch, and best of luck with Magic Mike XXL.

StB: Thanks so much, Kam.

To see a trailer for Magic Mike XXL, visit: https://www.youtube.com/watch?v=oLoyU3xYwbs

Interview with Kam Williams   Jersey-Raised Rocker on World Tour Takes a Pause for the Cause Born in his mother’s hometown of Trivandrum, India, the terra cotta-colored capital of Kerala, Ranjit Arapurakal spent his infancy […]