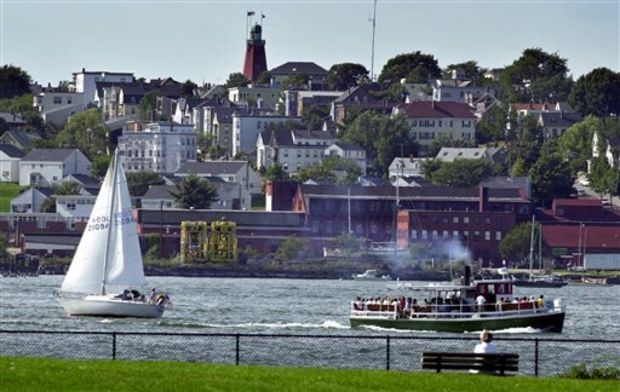 This Aug. 18, 2003, file photo shows homes on Munjoy Hill in Portland, Maine, overlook Portland Harbor. Home rental prices are climbing across much of the United States — with the biggest gains coming from not from New York or San Francisco but Jackson, Mississippi, and Portland, Maine. Rental prices in Portland, Maine have shot up 17.4 percent. (AP Photo/Robert F. Bukaty, File)

(AP) Home rental prices are climbing across much of the United States — with the biggest gains coming from not from New York or San Francisco but Jackson, Mississippi, and Portland, Maine.

Real estate data firm Zillow said Tuesday that prices nationally climbed a seasonally adjusted 4.3 percent in May from a year ago. Rents still are rising at double-digit rates in Denver, San Francisco and San Jose, California, with their job opportunities drawing new residents at a faster pace than construction can match.

But two smaller cities led the gains in May. Houses in the Mississippi capital of Jackson are renting monthly for $1,169, a 22.7 percent yearly increase. On the northeastern end of the United States, rental prices in Portland, Maine have shot up 17.4 percent.

The steadily rising costs of renting houses and apartments are creating new financial pressures for many Americans. Rental prices have grown at roughly double the rate of wages, forcing more Americans to limit their spending elsewhere or cutting into their savings.

A stunning 73 percent of renters say they have made financial trade-offs to pay their rents during the past three years, including taking a second job and going into credit-card debt, according to a survey released this month by the MacArthur Foundation.

The greater financial pressures have led 61 percent of Americans to say the country is still in the middle of the housing crisis, according to the survey.

Consumers are pessimistic about housing despite a clear rebound in sales. Home purchases increased 5.1 percent in May to annual rate of 5.35 million, putting the country on pace for the strongest sales level since 2007, according to the National Association of Realtors.

But the rising rental prices are limiting how much many would-be buyers can save to buy a home, particularly in cities with a higher concentration of jobs in technology and finance. Monthly rental prices for a one-bedroom apartment in Manhattan averaged $3,521 last month, according to the real estate brokerage Douglas Elliman.

Still, some cities have a glut of rental units available. Zillow found that rental prices fell slightly in Chicago, New Orleans and Milwaukee.