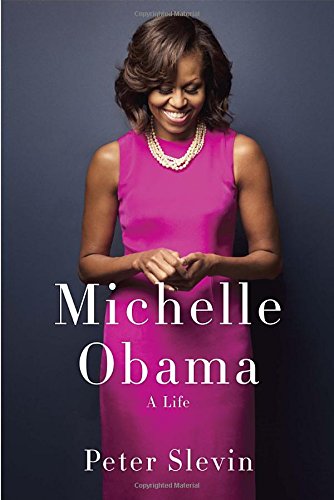 “Here is the first comprehensive account of the life and times of Michelle Obama, a woman of achievement and purpose—and the most unlikely First Lady in modern American history… The journey winds from the intricacies of her upbringing as the highly focused daughter of a gregarious water-plant worker afflicted with MS to the tribulations she faces at Princeton University and Harvard Law School during the racially charged 1980s.

And then returning to Chicago where she… embarks on a search for meaningful work that takes her back to the community… even as she struggles to find balance as a mother and a professional—while married to a man who wants to be president.

[The book] deftly explores the drama of Barack’s historic campaigns and the harsh glare faced by Michelle in a role both relentlessly public and not entirely of her choosing.”

Michelle Obama has been catching a lot of flak again, this time for her remarks during a recent commencement address at Tuskegee University. The First Lady has been under the gun ever since the 2008 presidential campaign, when her detractors playing “gotcha politics” quoted something she said out of context to suggest that she hates the United States.

But Michelle was making more complicated points than the simplistic sound bites she’s been reduced to. For that reason, it is appropriate that her biography opens with an in-depth analysis of a very emotional speech she delivered to Anacostia High’s graduating class of 2010.

She pointed out the irony in the fact that this public school located in a neighborhood marked by poverty, violence and inequality was also just a stone’s throw away from the U.S. Capitol. She went on make parallels between that ghetto and the one where she was raised on the South Side of Chicago.

Then, Michelle started to cry while recalling the sacrifices on the part of her parents which enabled both her and brother to attend Princeton. And when she finished, it was apparent that her salient message about the power of perseverance had resonated with all in attendance.

In Michelle Obama: A Life, author Peter Slevin paints an unapologetically rosy picture of the First Lady, opting to play down or entirely avoid any controversial subjects. It’s important to note that she never cooperated with the project, although he reportedly did get to interview a number of folks close to her.

A titanic, 400+ page tome, complete with 16 pages of color pictures, for fans who prefer to read an opus about the First Lady that accentuates the positive.

The “12 Strong” Interview with Kam Williams   A Spirited Tête-à-Tête with the Talented Athlete-Turned-Thespian Trevante Nemour Rhodes was born in Ponchatoula, Louisiana on February 10, 1990, but raised in Little Elm, Texas from the […]

Weekly Previews That Make Choosing a Film Fun  by Kam Williams For movies opening April 24, 2015   BIG BUDGET FILMS    The Age of Adaline (PG-13 for a suggestive comment) Romantic fantasy about a well-preserved, […]

The “Where’s Daddy?” Interview with Kam Williams   Renaissance Brother! Rel Dowdell is a screenwriter, film director and producer, as well as an English/screenwriting professor. Born and raised in Philadelphia, he received his B.A. in […]