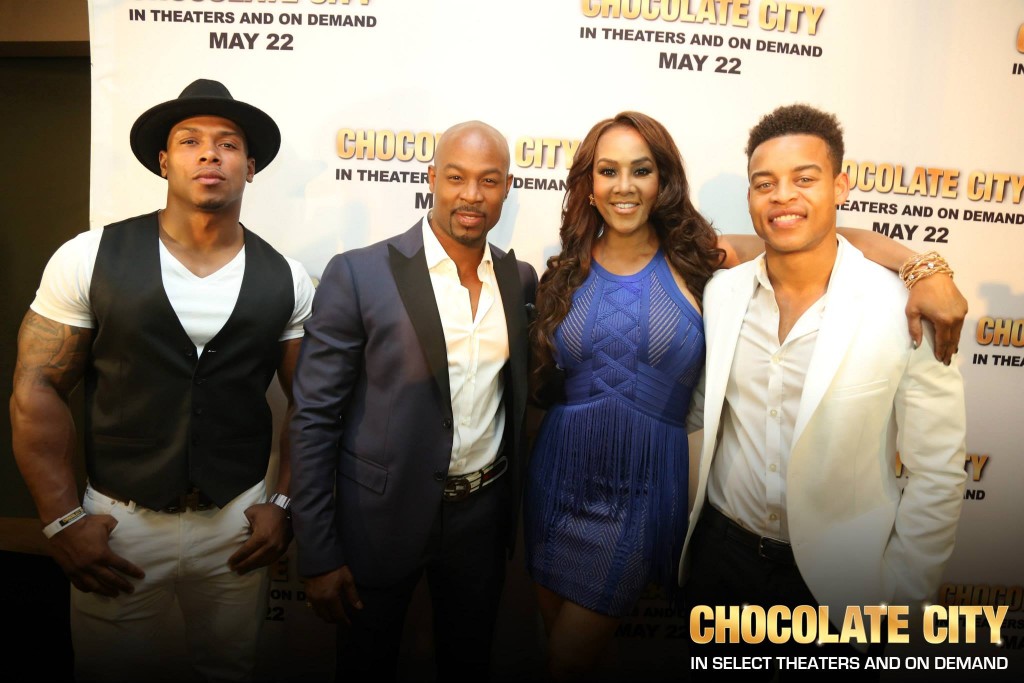 Vivica A. Fox, Tyson Beckford and Robert Ri’chard co-star in Chocolate City which is basically a remake of Magic Mike. Director Jean-Claude La Marre explains that he felt an African-American variation on the male stripper theme was in order, given the absence of black faces in the original.

This version of the tale revolves around a cash-strapped college kid (Richard) who hides from his mother (Fox) the fact that he’s moonlighting as an exotic dancer at a neighborhood nightclub on ladies’ night. The three recently spoke to me via a conference call about the film, and also about the rumors circulating in the tabloids of a steamy set romance between Vivica and Robert.

Kam Williams: Hey, thanks for the interview.

Robert Ri’chard: Hey Vivica, how are you?

Vivica Fox: I’m fine darling. How are you?

RR: When are you going to take me out for a glass of champagne, so I can buy you some chocolate?

VAF: [Laughs] You’re starting way too early, Robert. What, are you in need of a mimosa already? You’re too much! Too much!

RR: I heard you’re in Vegas.

TB: No, I was in Los Angeles a few hours ago. But now I’m in New York. And I’ll be back in Vegas at this time tomorrow.

TB: You keep sayng that, but you’ve got to rehearse. You can’t just show up and get onstage. We’ll have to work you out. You’re rusty.

RR: I want to come to a rehearsal tomorrow.

TB: We don’t have one scheduled. I’ll have to bring you in and rehearse you real quick, if I have time for it. 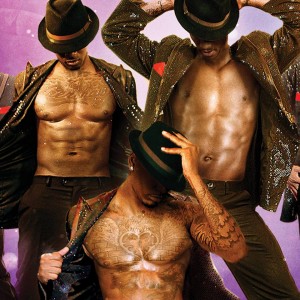 KW: Let me start off the interview with a question from children’s book author Irene Smalls. She asks: What interested each of you in Chocolate City?

TB: I’ll answer first, since I was the first to sign on. What interested me was the script. I loved how the characters showed their emotions. It made me feel for Robert’s character [Michael], because I’ve been through that as a college student trying to make my way through life. And I did the whole topless waiter thing in a male revue before, so I knew I could connect with it. In addition, I found the idea of Jean-Claude [director Jean-Claude La Marre] building an entire cast around me kind of intriguing. I was eager to see what he would come up with. So, that’s why I jumped in.

VAF: I’ll be very honest with you, Kam. I had worked with Jean-Claude before and, when I heard that he was doing this, I went to see Magic Mike. And I went, “Wow! How crazy is it that they don’t have any African-Americans in this?” I felt that whoever makes this film African-American will win. Jean-Claude let me know he wanted me to play the mom and, when he told me about the cast, I said, “I’m so totally in for this.” I’ve seen it, and it’s awesome. It’s a feel-good, girl’s night out film that everybody will enjoy.

KW: And why’d you do the film, Robert?

RR: Because I had a crush on Vivica.

TB: You see, that’s how rumors get started, Robert!

RR: The first time I ever modeled, I walked the runway with Tyson. And he let me walk in front of him. He was the man! I was like, “This is my dude!” So, when I was approached about working with him for a whole movie, I didn’t hesitate for a second. I just said, “Count me in.”

KW: Is there any truth to the rumor that you two are an item since making this movie?

VAF: Yes, Robert Ri’chard is the love of my life!

RR: The rumor’s not big enough.

VAF: [Laughs] We’re having fun, but let me set the record straight. No, it’s not true. It was my first time working with him. And our scenes were so intense that everybody was like, “Wow! They have a major connection with each other.” But it was literally mutual respect as actors. There’s no romance going on.

RR: Yet. I wonder how the tabloids are predicting the future.

KW: Editor/Legist Patricia Turnier for Vivica: I am a big fan and have followed your career since the late Eightiess. I probably watched Two Can Play That Game, one of my favorite romantic-comedies, over 40 times. Is there any chance you’ll make another sequel of this movie?

VAF: We actually made one sequel, called Three Can Play That Game. I did co-produce the film, but it didn’t do as well, because they didn’t allow me to have my original cast back. Lord, would I love to get that original cast back together, and do the real sequel that should’ve been done, because it’s a cult classic, and it’s been done by other nationalities. So, I’d love to do a true sequel. Absolutely!

VAF: Ooh! Directing is a lot of responsibility. In the future, yes, but I probably wouldn’t get into that for another five years or so.

KW: Patricia has a question for Tyson. She says. You have roots in Panama, and I am taking this occasion to say that I went there last year for almost a month. I was very moved by the warmth of the people there. Not one person was impatient towards me when I looked for words in my French-Spanish dictionnary to communicate with them. Given your diverse background, would you be open to play in a foreign film in the future?

TB: Yeah, I would definitely love to do that. Panama is like one of my homes. I have cousins down there that I’d like to bond with. So, I‘d love to make a movie there.

TB: That’s tough to answer, because you have to be cut from a certain type of cloth. You have to have be a certain height, build and a have a certain look. You can’t just wake up and decide to model one day. It’s hard to explain, but getting into the business is all about the features.

KW: “Realtor to the Stars” Jimmy Bayan says: Vivica, when you’re really feeling naughty, and you just want to let your diet go off the rails, what’s your guiltiest pleasure? Is there a place you specifically go in LA to get some really “bad” food? The type that makes you say, “Boy, I’m gonna have to hit the gym tomorrow.”

VAF: Do you hear them giggling in the background? I hear you. They’re so bad! Can you imagine having to deal with this all day? Where do I go? Two places: Casa Vega, because I love some good ole Mexican food, and California Pizza Kitchen, because I also love pizza. Those are my guilty pleasures, and not something else that they’re snickering about.

TB and RR: [Laugh some more]

KW: Jimmy also says: Tyson, you’ve enjoyed an enduring modeling career. When you started out, did you think this modeling thing would last as long as it has? Did you always have your sights set on the acting thing as a logical extension?

TB: A lot of people don’t know this, but I started out as an actor. Along the way, I was offered a modeling job, and the modeling took off. So, I put the acting off to the side. Still, I always told myself that once I made enough money, I was going to get out of the game. I didn’t intend to stay this long. I figured once my contract with Ralph [Lauren] was over, that I would go right into acting. But it’s taken awhile for Hollywood to recognize me. In fact, I still feel like they don’t recognize me yet, but they’re going to soon.

VAF: I know that’ right!

TB: You know me, Viv. You see how hard-headed I am. I ain’t stopping ‘til I get there.

VAF: I can tell you I’m so proud, because everyone’s really, really loving you at Chippendale’s, and you are just doing your thing. I’m so proud of you!

VAF: For me, it’s by keeping things simple, as far as the crowd of people that I’m around. I’ve also really learned to focus on family, and on how to be happy with myself from within.

RR: I come from a very religious family and, for me, the key is my family unit which supports me and keeps me grounded when it comes to just giving it up to God, and putting God first.

TB: I might not go to church as much as I should, but I walk with God every day. I speak to Him, I ask Him for things, and what I can do for Him. And we have a fair trade that has worked out for me.

TB: I see someone with drive who is not a quitter.

VAF: A grown woman who’s happy in her skin.

KW: Lastly, what’s in your wallet?

RR: I’ve got a Mastercard and about the same amount of money.

TB: American Express. I never leave home without it! [Laughs]

KW: Thanks again for the time, everybody, and best of luck with the film.

To see a trailer for Chocolate City, visit: https://www.youtube.com/watch?v=42HA58cBHAM

Film Review by Kam Williams   Big Sky Adventure Features P.C. Variation on Classic Western Theme I suppose the good old days are gone forever when you could make a Western without worrying about being […]

Film Review by Kam Williams   Elba Makes Directorial Debut with Jamaican Coming-of-Age Drama Dennis “D” Campbell (Aml Ameen) had the misfortune of growing up in the slums of Kingston, Jamaica in the Seventies […]