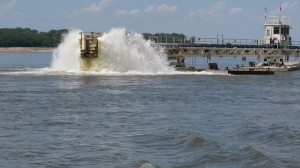 NEW ORLEANS (AP) – With the size of ships growing, the Army Corps of Engineers says it will begin looking at deepening the lower Mississippi River by as much as 5 feet – a move that would prove costly and carry ecological consequences.

On Tuesday the Army Corps said it would hold three public meetings in Belle Chasse, New Orleans and Baton Rouge to discuss the study and the river’s future.

Now the corps says it is looking at deepening the channel to as much as 50 feet.

Sanda Guest, vice president of the university’s foundation, said Tuesday that the push was announced last week at a board meeting of the fundraising body.

She says more than $300,000 has already been raised toward creating an endowed chair that would help supplement the salary of a professor on the Oxford campus.

Guest says supporters approached her about finding a way to express their appreciation for Jones, who is being forced to step down after the end of the summer after the College Board refused to renew his contract.

The chair will not be designated for any one department or academic discipline. Instead, university officials will choose beneficiaries, who could change over time.

The Meridian Star reports that the board of supervisors approved the project this week.

Lamar McDonald, chairman of the Meridian Military Team, says NAS Meridian wants to keep houses away from runways. He says it is safety for the base, where Navy pilots train.

The Navy and the Mississippi Development Authority each will contribute $1 million to buy the rights of way easements. McDonald says property owners will be able to keep their property but will be restricted as to what they can build on the land.

County Administrator David Engel will decide the purchase price after the property has been appraised.

GULFPORT, Miss. (AP) – A Gulfport man has been sentenced to more than eight years in prison for possession of child pornography.

Prosecutors say 49-year-old Timothy Winfred Miller paid $19 a month for a subscription to a child pornography website that allowed him access to more than 600 images of children engaged in sexually explicit activity.

Miller also must register as a sex offender for the rest of his life.

The government has filed for a criminal forfeiture in the case to seize Miller’s laptop computer, an Apple iPod, iPad and a Samsung hard drive used in the crimes.

Miller pleaded guilty to one count of possession.

JACKSON, Miss. (AP) Mississippians are being called to express their opinnions about school funding initiatives during a series of upcoming public hearings.

Secretary of State Delbert Hosemann announced the hearings Tuesday. They are Aug. 11 in Jackson, Aug. 13 in Hernando, Aug. 17 in Tupelo, Aug. 20 in Meridian, Aug. 27 in Cleveland, Sept. 1 in Hattiesburg, Sept. 3 in Biloxi and Sept. 8 in Brookhaven.

Citizen-led Initiative 42 would require lawmakers to fund “an adequate and efficient system of free public schools.” People could sue if funding falls short.

The Legislature put an alternative, Initiative 42-A, on the ballot. It originally said lawmakers must fund “an effective system of free public schools.”

There’s a court dispute about a judge’s rewriting the title of 42-A to say the Legislature should fund “effective public schools” but specify there’s no court appeal.

ATLANTA (AP) – Federal authorities say the pilot of a small plane bound for Mississippi radioed air traffic controllers, saying he was struggling to gain altitude seconds before slamming into a freeway in the Atlanta area, kliling all four onoard.

A preliminary report released Tuesday by the National Transportation Safety Board says the pilot’s last radio transmissions came about two minutes after departure from DeKalb Peachtree Airport shortly after 10 a.m. May 8.

The report quotes the pilot saying “I’m having some problem climbing here.”

Authorities say all four people onboard died in the crash of the Piper PA-32, which was headed to Oxford, Mississippi.

3 arrested in death of security guard in Clarksdale

CLARKSDALE, Miss. (AP) – Bond has been set at $500,000 each for three men arrested in the fatal shooting of a security guard in Clarksdale.

Assistant Police Chief Robbie Linley tells The Clarksdale Press Register that each of the three men is charged with murder. Linley says those arrested Friday were a 16-year-old juvenile, 20-year-old Jeremy Evans and 21-year-old Demarcus Bryant. They are being held in the local jail. It is unclear if they have attorneys.

Catledge was transported to North Mississippi Regional Medical Center in Clarksdale, where he died from his injuries.

HOOVER, Ala. (AP) – Geoffrey Bramlett pitched a complete game and struck out 10 batters, leading Alabama to a 6-1 victory over Mississippi Tuesday in the opening game of the Southeastern Conference tournament.

The Crimson Tide (31-26) plays Texas A&M on Wednesday, when the tournament moves to the double-elimination format. Ole Miss (30-26) was knocked out.

Bramlett (8-3) allowed nine hits, all singles, and didn’t walk anybody.

Alabama gave him all the cushion he needed with a four-run seventh inning, including Casey Hughston’s RBI double. Hughston had two hits and drove in two runs. JC Wilhite and Mikey White also had two hits for the Tide.

Ole Miss had four players with two hits each – Errol Robinson, Will Golsan, Kyle Watson and J.B. Woodman. Robinson drove in the Rebels’ lone run with a single in the fifth.

Scott Weathersby (4-2) absorbed the loss after giving up three runs in six innings.

JACKSON, Miss. (AP) — A foundation that’s pledged $20 million toward a new science building at the University of Mississippi says it won’t give the money unless the College Board retains Ole Miss Chancellor Dan […]

HATTIESBURG, Mississippi (AP) — A federal judge has ordered that a University of Southern Mississippi student under investigation for allegations of child pornography be held without bond pending trial.

U.S. Magistrate Judge Mike T. Parker wrote in his detention order Monday that 24-year-old Miles Justin McNairy was a risk to others and the community… […]