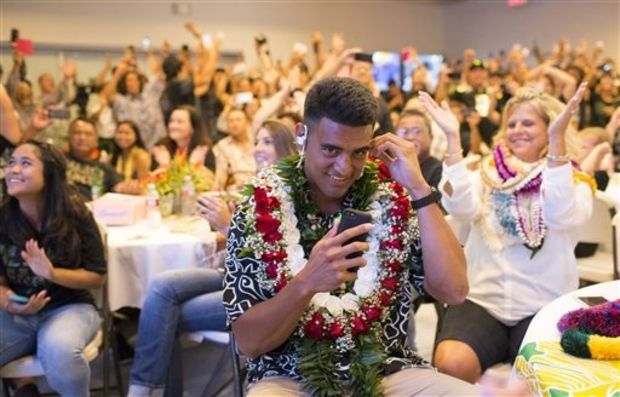 Former Oregon quarterback Marcus Mariota reacts to being drafted by the Tennessee Titans with the second pick in the first round on NFL Draft Day Thursday, April 30, 2015, in Honolulu. (Thomas Boyd/The Oregonian via AP, Pool)

You don’t pass up a potential franchise quarterback.

Not in today’s pass-happy NFL.

So Jameis Winston is headed to Tampa Bay as the first overall selection and Marcus Mariota goes to Tennessee at No. 2. They’ll take their Heisman Trophies (Winston in 2013, Mariota last year) and try to turn two downtrodden franchises into contenders, maybe even champions.

It was the sixth time since 1967 that quarterbacks went 1-2, and this was no surprise. The biggest question was whether Florida State’s Winston had too much off-field baggage for the Bucs. Obviously not.

His college coach, Jimbo Fisher, has no doubts either.

“There are always bumps in the road,” Fisher said. “But as far as on the field, he’ll learn. He has an unbelievable ability to learn and learn fast.

“Off the field he’s an extremely great guy. People will be shocked with how he represents (the Bucs).”

Some questioned Mariota having barely taken any snaps behind center in Oregon’s quick-tempo attack, but Titans coach Ken Whisenhunt, who has done big things with such veteran quarterbacks as Ben Roethlisberger, Kurt Warner and Philip Rivers, clearly isn’t concerned.

“He’s a talented young man who has a very good feel for the position and how to process those things,” Whisenhunt said, “and we’re excited to get a chance to work with him.”

Winston and Mariota each had a year of eligibility remaining. So did the next two picks, when linebacker Dante Fowler Jr. of Florida headed upstate a bit to Jacksonville, then Oakland grabbed Alabama wide receiver Amari Cooper.

The first senior taken was Iowa tackle Brandon Scherff by Washington in the fifth spot, a bit of a surprise.

Tampa has the receivers to help Winston in Vincent Jackson and Mike Evans, both of whom went over 1,000 yards last year despite shoddy quarterbacking. Tennessee can’t make the same claim.

Each of those teams went 2-14 in 2014, but coaches Lovie Smith and Whisenhunt, in their first seasons in charge, survived the awful record. Now, they presumably have the main building tool.