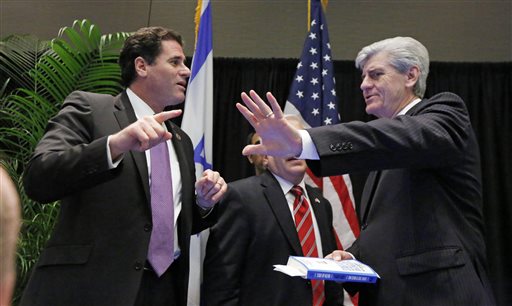 JACKSON, Miss. (AP) – Leaders of Israel and Mississippi say they want to increase what is now a tiny trade between the Magnolia State and Middle Eastern nation, building an economic relationship on top of political ties.

Gov. Phil Bryant and Israeli Ambassador Ron Dermer hosted a trade meeting Tuesday in Jackson. Dermer says Mississippi can benefit from Israel’s technological innovation, while Bryant says he wants Mississippi to enhance its economy by trading with an ally.

Mississippi exported $11.4 billion in goods and services in 2014, but only $33 million to Israel.

It’s up to Gov. Phil Bryant to protect the Big Gulp and the Happy Meal in Mississippi.

The bill, introduced by Picayune Republican Sen. Tony Smith, is meant to keep Mississippi cities and counties from modeling rules after cities like New York. […]

By EMILY WAGSTER PETTUS   JACKSON, Miss. (AP) — A federal judge on Tuesday temporarily blocked a new Mississippi law that bans abortion after 15 weeks’ gestation — the most restrictive abortion law in the […]