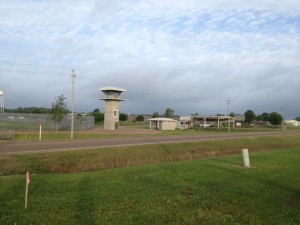 JACKSON – Visitation at the Central Mississippi Correctional Facility and at the State Penitentiary at Parchman is canceled this weekend.

CMCF and Unit 29 are on lockdown as the Mississippi Department of Corrections investigates how recently discovered contraband items got into the facilities.

“Visitation is a privilege,” Commissioner Marshall Fisher said. “In order for that privilege to be applicable at our institutions, we expect our offender population to observe and respect MDOC rules. This is in no way meant to punish inmate families. However, we will not reward bad behavior. Until that is understood by our offender population, stiff sanctions will continue.”

On Tuesday, a box filled with contraband was delivered to CMCF via a commercial vehicle.

On the same day at Unit 29 in Parchman, which houses more than 1,000 inmates, shanks, cell phones, cell phone chargers, spice and other homemade weapons were found during a shakedown.

Introduction of contraband into a correctional facility is punishable by three to 15 years in prison, a maximum $25,000 fine, or both. Conspiracy to introduce contraband carries up to a $5,000 fine, five years imprisonment, or both.