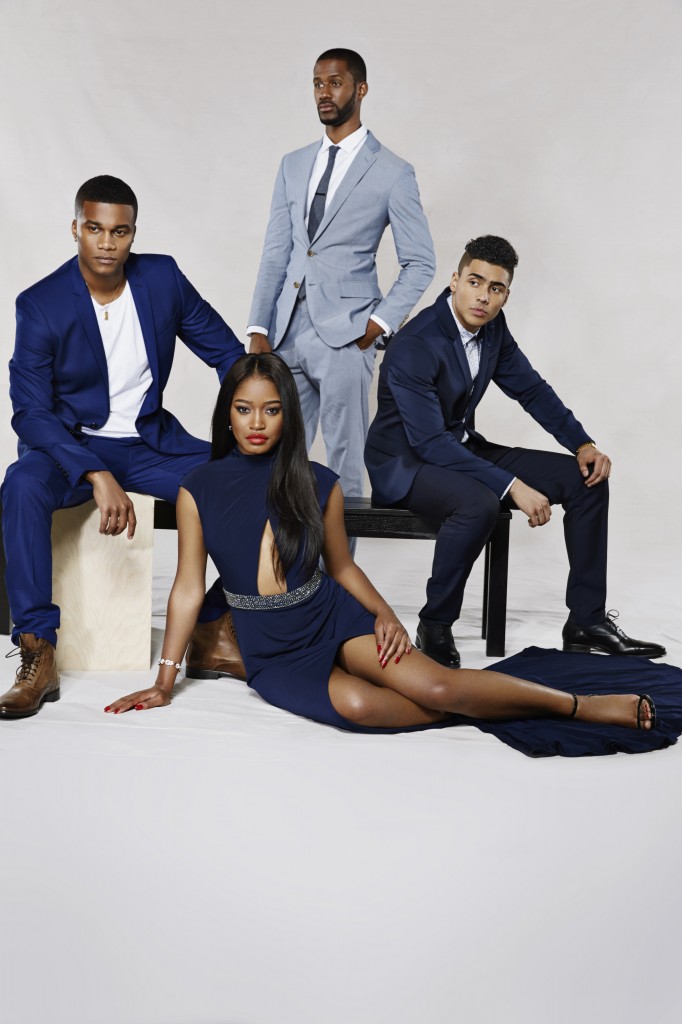 Keke Palmer is a multi-talented actress, singer, songwriter and talk show host who made her screen debut at the age of 10 in Barbershop 2 before landing a breakout role a couple of years later as the title character in Akeelah and the Bee. The emerging ingenue has since embarked on an enviable showbiz career in film, on TV and in music while also finding time to give back to the community.

By contrast Oscar-nominee Queen Latifah (for Chicago) started out as a hip-hop artist before adding acting to her repertoire. She’s also proved to be a popular spokesperson for everything from Jenny Craig to Pizza hut to CoverGirl cosmetics.

Here, the two talk about Brotherly Love, a hip-hop driven drama starring Keke which was produced by Latifah.

Kam Williams: Hi Queen and Keke, I’m so honored to have this opportunity to speak with both of you.

Keke Palmer: So are we.

KW: Queen, Professor/Filmmaker/Author Hisani DuBose has a question for you: With all that you’ve accomplished, was it still difficult for you to get this project greenlit?

QL: Well, it wasn’t hard to get it greenlit, because we greenlit it. [Laughs] It’s easy when you’re the greenlighter. Really, it was more about lining up the financing. It always comes back to the dollars and cents, and finding the money to be able to fund the project and make it happen. That’s what we went on immediately, and I’m fortunate to work with a tiger who doesn’t rest until it all happens. He and I really jumped in on it until and worked with some other partners to help create the finances, and they came through for us. So, we all put it together, collectively, and made it happen.

KW: Hisani has one for Keke, too: Did you feel a lot of pressure having to grow from a child star into a woman under the bright lights of Hollywood?

KP: I definitely, at times, felt the pressures of life similar to the pressures anyone would feel growing up. The only difference was that maybe more people were aware of mine. But, if anything, I changed the pressure from negative to positive. So, instead of thinking everybody wanted to see me fail, I decided everybody wanted to see me win, since I wanted to see myself win. I’m glad and appreciate having people on my team who are watching and looking out for me. Let me continue to make them proud and continue to give away the gift that was given to me.

KW: Editor/Legist Patricia Turnier asks: Keke, how did you prepare to play Jackie?

KP: I thought it was really awesome that I got a chance to be in a movie being made right in Philadelphia. Being around a lot of kids, walking around the streets of Overbrook and actually getting to know the neighborhood helped give me an idea of what their reality was like. It was nice to discover that it wasn’t that much different from where I grew up. And then I also got to spend time with the rest of the cast, because this was an independent film. That meant we had so much more creative control and creative liberties, as well as a lot of time to spend with one another while we were trying to get everything going. I think the chemistry among the cast is what really makes the film feel so good to me. We got to work with each other long enough to get a feel for each other and that really made the characters come to life.

KP: I want them to get whatever they honestly get from it. I don’t want to tell them what they should be receiving from it, ‘cause that would kill the experience. But what I took away from the film was the importance of choices. Sometimes, when you grow up in one of these poverty-stricken neighborhoods where the educational system isn’t the best, you don’t realize that you have any choices. Often, kids don’t appreciate the choices available, as if it’s either the street or nothing. I want them to understand that reality is what’s relative to you, and that you can make choices that allow you to create a new reality for yourself.

KW: Bobby Shenker says: I was so excited to hear that you’re starring as Bessie Smith. Years ago, when I saw you in Living Out Loud [with Holly Hunter and Danny DeVito], I said, “This woman needs to play Bessie Smith in a biopic.” And I’m sure I’ve posted numerous suggestions of this over the years. So I’m ecstatic! I think I revisited that thought when you did Chicago. My only wish would have been that it was on the big screen. Love from Philly to the Queen!

KW: Marcia Evans says: Share that we sistahs are proud of the Queen. And tell her that not only myself but my mother and my aunt adore her work. So she must keep her film projects coming because we will be watching. We can’t wait to see her upcoming new biopic about the iconic blues singer Bessie Smith. She asks: Do you have another biopic planned?

QL: Thanks, Marcia. There are actually a couple floating around, but the scripts aren’t quite where they need to be for me to pull the trigger on them yet. And I’m working on three scripts that are really close to me featuring three completely different characters from totally different time periods. So, I’m going to have a lot of fun once I decide which one’s going to go first. And I can’t wait! [Chuckles]

KW: Environmental activist Grace Sinden says: Keke, I am impressed with your career achievements at a young age, and I’m additionally impressed with your philanthropic work, for example, with the Boys & Girls Club, Urban Farming, Saving Our Daughters, including anti-bullying, etcetera. What motivated you to be so involved with charitable activities?

KP: Something that was instilled in me by my parents at a very young age is that there is no happy life without a life of service. Over the course of my career, I’ve been fortunate to always encounter others who share that philosophy, like Queen Latifah, people who understand that when you’ve been blessed, you have to share your gifts, and you also have to help others give their gifts away. Being of service is something that really makes me happy. Being able to tell young kids about something they might never have known without meeting someone with my experiences is what really what I feel it’s all about. I feel that’s the only way that you get fulfillment out of life.

KW: Reverend Florine Thompson asks: What advice do you have to offer young girls hoping to emulate your success?

KP: To be true to your heart, and if you’re passionate about your dream, work towards it but don’t allow your idea of how you think it should manifest prevent what’s actually unfolding from happening. You know what I mean? Be present in the moment and allow yourself to be guided by it by God. Allow Him to guide you and just embrace every situation, good or bad, since you’re experiencing it because you’re meant to go through it.

KW: Thanks again for the time, and best of luck with Brotherly Love.

To see a trailer for Brotherly Love, visit: http://brotherlylovethemovie.com/#trailer

“Pope Francis: A Man of His Word” Interview with Kam Williams   The Three-Time Oscar-Nominee Delivers a Reflective Homily Wim Wenders came to international prominence as one of the pioneers of the New German Cinema […]