A Spirited Tete-a-Tete with the Miniseries’ Star and Director 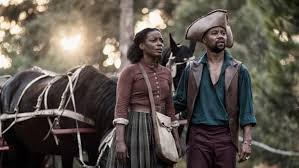 Aunjanue Ellis starred as Aminata Diallo in The Book of Negroes, the hit, TV-miniseries based on Lawrence Hill’s award-winning best seller of the same name. Here, she and the picture’s director, Clement Virgo, share their thoughts about the adaptation of the historical novel chronicling the life of an 11 year-old girl kidnapped in Africa and enslaved for decades in the U.S. until she manages to escape to Canada.

Kam Williams: Hi Aunjanue and Clement, thanks for the interview.

KW: What interested you in The Book of Negroes, Aunjanue?

AE: To be honest, the first thing that interested me was seeing that the CBC [Canadian Broadcasting Corporation] and BET [Black Entertainment Television] were partnering on the project. In my mind, I couldn’t think of two more divergent networks. Then, I found out it was based on this wonderful historical novel about a woman’s story of survival. I love doing that kind of work.

KW: Did you read the book before accepting the role?

KW: Clement, what inspired you to turn it into a mini-series?

CV: The book was quite a phenomenon in Canada, where it won the Commonwealth Writers’ Prize and sold a million copies. I fell in love with Aminata Diallo and enjoyed reading about the period of history that she takes us through. I thought I knew about the American Revolutionary War and about my own and Canadian history. But I didn’t know about people migrating from New York to Nova Scotia, or appreciate that if you were African-American, you really had to choose sides during the Revolutionary War. And I saw Aminata as being a lot like Dorothy in The Wizard of Oz, where she was caught up in this twister of slavery, and all she wanted to do was get back home. Her determination to survive was so powerful, I felt like I had to tell the story.

KW: Given the facts brought out about the Revolutionary War by The Book of Negroes, do you think that the American colonies were on the wrong side of history? The film suggests that the British were lesser of two evils. Have blacks been mis-educated into siding with the Patriots over the British Loyalists in the same way Native Americans talk about being manipulated by movies as children into rooting for the Cowboys over the Indians?

AE: The British kept their slaves while wanting to get rid of America’s, so you can take from that what you will. It’s a lot more complicated than we’re led to believe.

KW: Do you think George Washington’s ex-slave, Henry Washington, should be more of a hero to African-Americans than his master, the first president of the United States? After all, he escaped from slavery and then gained his freedom by fighting with the British during the Revolutionary War.

AE: America is steeped in mythology. The problem is that it’s been living a myth since its inception, starting with The Declaration of Independence. How can you say that all people are created equal, but mean only if they’re white and male? So, we, as its citizens, have continually had to die in the streets to force the country to live up to that promise and be more than a myth, and be a reality for all. That’s why it’s so genius that Clement has Aminata say to George Washington, “If this is what you’re claiming to be, then why do you have slaves?” This picture does a great job of shattering the myths perpetuated in many schoolbooks.

KW: This film actually moved me to tears on several occasions, like the very touching scene where Aminata tracks down her baby shortly after it was sold, but was immediately ordered off the plantation by its heartless, new slave owner.

CV: I’m glad to hear that. It was important to all of us to capture the totality of these characters’ humanity and not just reduce them to their circumstances. Aminata fascinates me, because she reminds me of all that black people have had to overcome. I also appreciated the fact that she was a midwife, since one of the last things she had been told by her mother before being kidnapped and sold into slavery was, “As long as babies are being born, life will go on.” So, her subsequently bringing life into the world is very, very significant.

KW: Editor Lisa Loving says: I meet so many people who don’t really know, or worse, don’t think about, the racist roots of our country which have grown into this imperfect present day. Do you see the success of The Book of Negroes miniseries as part of a greater awareness in the United States of our racist history and how we should be living now?

CV: I consider it part of my job as a filmmaker to put art out into the world that is positive and affirms life. Yes, it says the roots may be racist and brutal, but it cannot define us and it cannot stop us.

KW: Lisa also asks: Who do you feel is The Book of Negroes’ intended audience?

KW: Harriet Pakula-Teweles asks: How much of YOU is in Aminata Diallo, and how much did you allow yourself to get lost in the character?

AE: Aminata couldn’t be more different from me than any character I’ve ever played in terms of her temperament, her world view and the way she carried herself with so much wisdom and grace, even as a child. My sense of self is a lot more haphazard. I lost myself with her, when I put my costume on. You can’t go through what she went through as an actor without giving yourself over to it completely. And I did. So, it got very hard and depressing. Who she is, is not me, which is why playing her was so rewarding ultimately. And I’m very grateful when anyone compliments me on my performance, since that means that they didn’t catch on that I was acting.

KW: Lastly, what’s in your wallet?

CV: [Laughs] What’s in my wallet? I have a check for $257 that I’ve been walking around with for three weeks that I need to cash.

AE: [Laughs] I have a wallet that I got when we were shooting in South Africa. What’s in it? Some change from Canada and other places, and my expired driver’s license. [Laughs some more]

KW: Thanks again for the time, Aunjanue and Clement, and best of luck with all your endeavors.

AE: Thank you so much, Kam.

To see a trailer for The Book of Negroes, visit: https://www.youtube.com/watch?v=QNHG_3-Zad8

To order a copy of The Book of Negroes on DVD, visit: http://www.amazon.com/exec/obidos/ASIN/B00RUT3DWG/ref%3dnosim/thslfofire-20

Call Me by Your Name

Book Review: More Than a Score

April 28, 2015 Online Editor Entertainment Comments Off on Book Review: More Than a Score