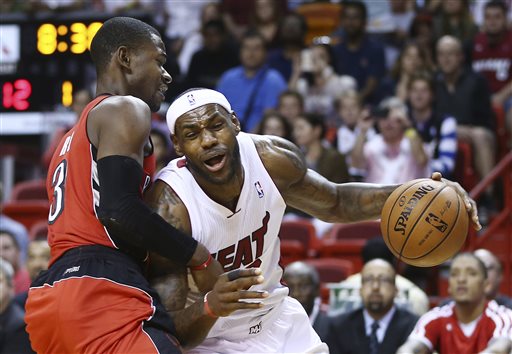 HOUSTON (AP) — James Harden had 31 points, 11 rebounds and 10 assists for his second triple-double this season, leading the Houston Rockets to a 113-102 victory over the Minnesota Timberwolves on Monday night.

Harden got off to a slow start, missing his first seven shots. He got going late in the first quarter, had 13 points at halftime and was a rebound away from wrapping up his fourth career triple-double entering the fourth.

Houston led by nine at the start of the final period, but Andrew Wiggins led a charge that cut the lead to one point with less than 4 minutes left.

The Rockets took over after that, using a 14-2 run, with five points from Harden, to make it 111-98 with less than a minute to go.

Wiggins scored 30 for the Timberwolves, who lost for the third time in four games.

Marc Gasol added 14 points and Zach Randolph had 10 rebounds as the Grizzlies improved to 15-3 since Green joined the team on Jan. 12. They won using balanced scoring with no one getting 20 points.

Memphis led by eight before the Clippers scored seven in a row to close to 88-87, but Chris Paul lost the ball and Conley was fouled. He made both and the game ended with Matt Barnes throwing the ball into the hands of Courtney Lee.

Paul had 30 points and 10 assists for the Clippers, with Jamal Crawford scoring 15 points off the bench.

Dwyane Wade scored 18 for the Heat, who stayed in the No. 7 spot in the Eastern Conference. Hassan Whiteside added 12 points and 14 rebounds for Miami, which shot 55 percent.

Hollis Thompson scored 22 points for Philadelphia, which got 18 from Nerlens Noel, 16 from Robert Covington, 12 from Henry Sims and 11 from Isaiah Canaan.

It was a good-news day all around for Miami. Heat coach Erik Spoelstra said before the game that Chris Bosh — who has blood clots on a lung, a season-ending issue — will be going home “soon” from a hospital where he’s been treated since late last week.

Pau Gasol added 15 points and 10 rebounds as the Bulls enjoyed a whopping 62-41 advantage on the glass. Joakim Noah had eight points and 16 rebounds on his bobblehead night, and Jimmy Butler finished with 11 points and nine boards.

Milwaukee shot 34 percent (30 for 89) from the field in its second straight loss after a stretch of nine wins in 10 games. Ersan Ilyasova had 15 points and 11 rebounds in his first start since Jan. 27 at Miami.

Chicago played without key reserves Taj Gibson and Kirk Hinrich, who were away from the team due to an illness.

Luke Babbitt scored a season-high 18 for New Orleans, including a clutch 3-pointer that gave the Pelicans their first lead of the game with 1:55 to go.

The clutch outings by the two reserves helped New Orleans overcome the absence of All-Star Anthony Davis and Ryan Anderson, who were both injured Saturday night in Miami.

Kyle Lowry scored 22 for Toronto, which lost its second straight. Jonas Valanciunas had 17 points and 14 rebounds.

The Jazz used an energetic defensive effort to turn a season-high 22 Spurs turnovers into 17 points. Forward Gordon Hayward scored 18 despite a poor-shooting night, while Derrick Favors added 14 points and 10 rebounds.

Duncan had 14 points and 10 rebounds. Boris Diaw chipped in 13 points and Cory Joseph had 10.

Boston made a season-high 14 3-pointers, 10 in the first half as the Celtics ran out to a 19-point league against the struggling Suns. But Phoenix cut the lead to one on a 3 from Eric Bledsoe with 2:33 remaining.

Thomas, just four days removed from his deadline-day trade to Boston, scored 21 points in his return.

Bledsoe had 21 points and 10 assists in the Suns’ eighth loss in the past nine games. Brandon Knight, acquired in another Suns deal last Thursday, had 20 in his first start for his new team.

Deron Williams added 16 points and 12 assists, and Thaddeus Young scored 15 in another solid outing for the Nets since his acquisition last week from Minnesota in exchange for Kevin Garnett. Brooklyn, coming off a 114-105 win at the Los Angeles Lakers last Friday, won back-to-back road games for the first time since mid-January.

Danilo Gallinari had 22 points for the struggling Nuggets, who have lost 16 of 18 — including seven in a row at home. It matches their longest losing streak at the Pepsi Center since also dropping seven straight from Feb. 6 to March 2, 2003.

LOS ANGELES (AP) — Kobe Bryant of the Los Angeles Lakers has decided to retire after this season. The 37-year-old Bryant made the announcement in a post on The Players’ Tribune on Sunday. The decision was not […]

MIAMI (AP) — Tyler Johnson scored a career-high 26 points, Goran Dragic added 21 against his former team and the Miami Heat beat the Phoenix Suns 115-98 on Monday night in a game that included […]

By CLIFF BRUNT OKLAHOMA CITY (AP) — Russell Westbrook became the first player since Michael Jordan in 1989 to have four consecutive triple-doubles, according to STATS, and the first since Jordan that year to have back-to-back […]