Broadus, a wide receiver from Bishop Gorman High School in Las Vegas, signed with UCLA instead of his father’s favorite team. Snoop Dogg had hoped his son would play for Southern California, but was still thrilled for him.

“Channel 21 comin to @UCLAFootball !! Proud of u @C_Broadus21 ! LA’s team!!” Snoop tweeted. Twenty-one is a reference to the number his son will wear for the team.

UCLA coach Jim Mora says he had offered a scholarship to Broadus when he was just 15 years old.

The 6-foot-3, 190-pound Broadus was ranked the 27th best receiver in the nation by Rivals.com, a leading recruiting news site. 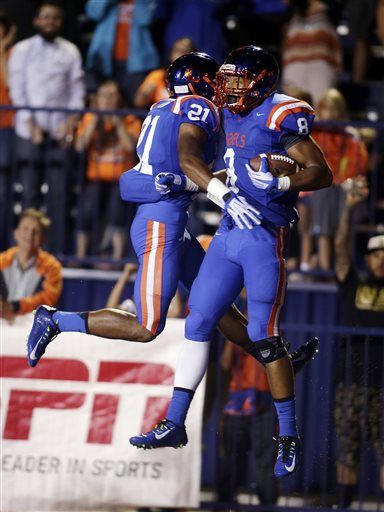 KANSAS CITY, Mo. (AP) — Mississippi State’s Vic Schaefer was in no hurry to talk about returning to the Final Four, instead spending the first few minutes on the dais quietly circling the highlights on […]

No. 1 Mississippi State win streak up to 12 games after 45-16 win over Tennessee-Martin

November 10, 2014 Online Editor Sports Comments Off on No. 1 Mississippi State win streak up to 12 games after 45-16 win over Tennessee-Martin

STARKVILLE, Mississippi (AP) — Dak Prescott stepped up in the pocket and then pulled the ball down, accelerating through the left side of the line and darting down the sideline for an easy 48-yard touchdown […]