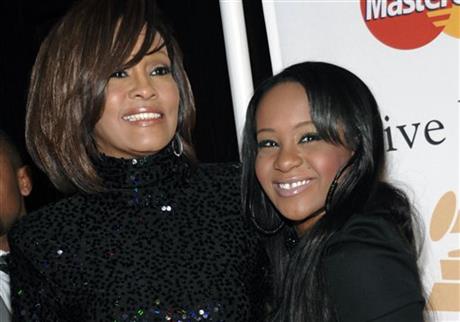 In this Feb. 12, 2011, file photo, singer Whitney Houston, left, and daughter Bobbi Kristina Brown arrive at an event in Beverly Hills, Calif. The daughter of late singer and entertainer Whitney Houston was found Saturday, Jan. 31, 2015, unresponsive in a bathtub by her husband and a friend and taken to an Atlanta-area hospital. The incident remains under investigation. (AP Photo/Dan Steinberg, File)

NEW YORK — Bobbi Kristina Brown is fighting for her life, according to a statement from the Houston family Monday.

Police said the 21-year-old daughter of Whitney Houston and R&B singer Bobby Brown was taken to a hospital Saturday after she was found face down and unresponsive in a bathtub in a suburban Atlanta townhome.

The statement said that Brown is surrounded by immediate family and that the family was requesting privacy. No more details were provided.

“We are asking you to honor our request for privacy during this difficult time,” the statement read. “Thank you for your prayers, well wishes, and we greatly appreciate your continued support. ”

Whitney Houston was found dead in a hotel bathtub in 2012.