Bryant spoke to more than 100 people who gathered on the Capitol steps to oppose the standards, saying they’re a loss of state control and academically flawed.

“What we must begin to do is begin to erase that chalkboard and begin to write a plan upon it that will be of benefit to every child in every school in Mississippi,” Bryant said.

He urged them to build on an executive order he signed in 2013 that aimed to protect the state from federal interference. Bryant said Common Core, an initiative of state officials and private groups, was improperly foisted on the states by the federal government.

The standards were adopted by Mississippi and many other states. They’re intended to provide national benchmarks while helping students learn more analytically and less by memorization. State Superintendent Carey Wright and members of the state Board of Education, who adopted Common Core in 2010, are standing by the standards.

“Mississippi’s College- and Career-Ready Standards are by far the highest academic standards we have ever had in the state or the nation,” Wright and Board of Education Chairman John Kelly said in a joint statement in December.

Among the organizers of Tuesday’s rally was Brandie Correro of Hernando. Correro said she objects to Common Core because they require her fourth-grader Lexi to learn abstract concepts that she considers inappropriate for a child that age.

When pressed for an example by a reporter, she said she couldn’t immediately give one. 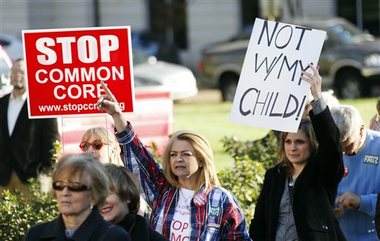 Correro said she will be withdrawing Lexi from public school to home-school her. She said that she’ll know the battle is won “when the standards are rewritten and our children aren’t biting their nails off and crying at night.”

The rally, meant to build pressure on lawmakers to oppose Common Core as the 2015 legislative session opened, was attended by state senators who led an unsuccessful fight against Common Core last year.

Their prospects could be better this year, as Lt. Gov. Tate Reeves now says he opposes Common Core.

Sen. Michael Watson, R-Pascagoula, one longtime foe of Common Core, said that opponents “will not stand for rebranding, repackaging, renaming or anything else besides the complete repeal of Common Core.”

He said he envisions a process where Mississippi adapts pre-Common Core standards rated high by experts and then hires a firm to make a test.

JACKSON, Mississippi (AP) — House Speaker Philip Gunn and fellow Republicans want to give a $1,500 raise to most public school teachers over the next two years, and a projected raise of around $2,750 over […]

COMMON CORE Bryant vetoes bill he calls weak on ditching Common Core JACKSON, Miss. (AP) – Gov. Phil Bryant has vetoed a bill that might have put some distance between Mississippi schools and the Common […]