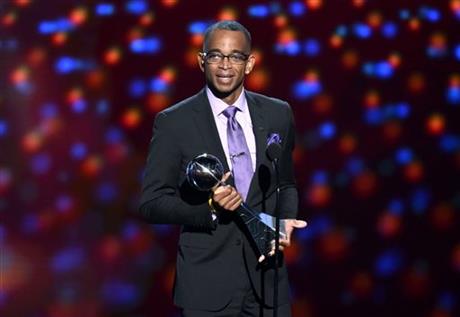 Stuart Scott was in his element, working a “Monday Night Football” game, when he was forced to leave for an appendix operation.

Doctors discovered a tumor during surgery and Scott was diagnosed with cancer. But he made a point of continuing to live his life — at work and outside of it.

“You beat cancer by how you live,” he would later say. “So live. Live. Fight like hell.”

That fight ended Sunday when Scott, the longtime “SportsCenter” anchor and ESPN personality known for his enthusiasm and ubiquity, died at age 49.

Scott remained dedicated to his craft even as he suffered through chemotherapy, radiation and surgery.

ESPN President John Skipper said in a statement that Scott was “a true friend and a uniquely inspirational figure” and that his “energetic and unwavering devotion to his family and to his work while fighting the battle of his life left us in awe, and he leaves a void that can never be replaced.”

“Who engages in mixed martial arts training in the midst of chemotherapy treatments?” Skipper said. “Who leaves a hospital procedure to return to the set?”

Fans and players at games around the United States on Sunday stopped to observe moments of silence, including at the Bengals-Colts NFL playoff game in Indianapolis, Lions-Cowboys in Arlington, Texas; the Mavericks-Cavaliers NBA game in Cleveland and at several college basketball games.

Some of the world’s most famous athletes expressed their grief online. LeBron James wrote on Instagram: “Thank you so much for being u and giving us inner city kids someone we could relate to that wasn’t a player but was close enough to them.”

“Stuart wasn’t covering heroes & champions, it was the other way around,” Tiger Woods said on Twitter.

In July, Scott accepted the Jimmy V Perseverance Award at the ESPYs. During his speech, he told his teenage daughters: “Taelor and Sydni, I love you guys more than I will ever be able to express. You two are my heartbeat. I am standing on this stage here tonight because of you.”

On Sunday morning, NFL Network broadcaster Rich Eisen’s voice broke as he reported the death of his good friend, with whom he worked on “SportsCenter” broadcasts.

“I love this man,” Eisen said.

ESPN anchor Hannah Storm called him “our colleague, our friend and our inspiration” as she reported the news. On the network’s NFL pregame show, Chris Berman said, “Stuart made ESPN what it is, he made us better people.”

Before North Carolina’s women’s basketball team tipped off against N.C. State, the arena observed a moment of silence for Scott, and the videoboard proclaimed the 1987 graduate “Forever a Tar Heel.”

Born in Chicago, Scott attended high school in North Carolina before going to UNC. He returned to Chapel Hill as the university’s commencement speaker in 2001.

Scott worked at three TV stations in the southern U.S. before joining ESPN for the 1993 launch of its ESPN2 network, hosting short sports update segments.

He often anchored the 11 p.m. “SportsCenter,” where he would punctuate highlights with an emphatic “Boo-ya!” or note a slick move as being “as cool as the other side of the pillow.”

Scott went on to cover countless major events for the network, including the Super Bowl, NBA Finals, World Series and NCAA basketball tournament. He also interviewed President Barack Obama, joining him for a televised game of one on one.

“I will miss Stuart Scott,” Obama said in a statement. “Stu helped usher in a new way to talk about our favorite teams and the day’s best plays. For much of those 20 years, public service and campaigns have kept me from my family — but wherever I went, I could flip on the TV and Stu and his colleagues on “SportsCenter” were there. … Michelle and I offer our thoughts and prayers to his family, friends and colleagues.”

In July, when he accepted the ESPY award named for former N.C. State coach Jim Valvano, who died of cancer in 1993, Scott shared what he had learned from his struggle: “When you die, that does not mean that you lose to cancer. You beat cancer by how you live, why you live, and the manner in which you live. 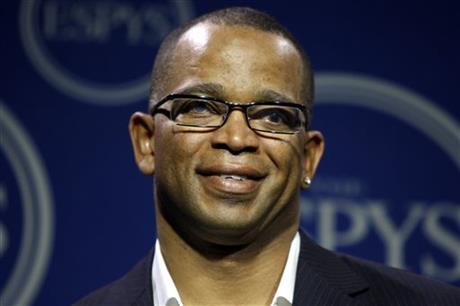