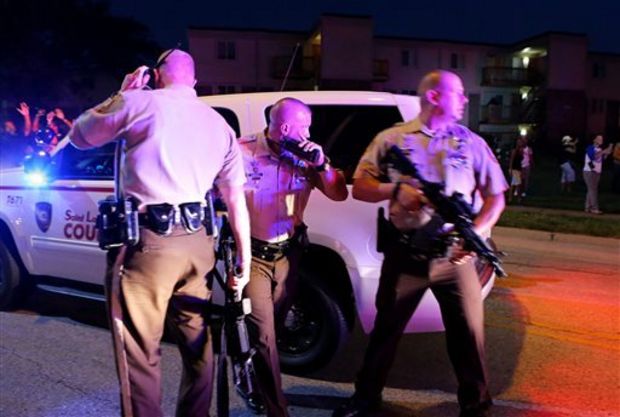 In this Aug. 9, 2014 photo, police officers stand near a crowd gathering by the scene where 18-year-old Michael Brown was fatally shot by a police officer in Ferguson, Mo. More than three months later, the world knows all about Ferguson, about the weeks of protests and rioting that followed the brief, but explosive encounter between a white police officer, Darren Wilson, and the black teenager, and the deep veins of mistrust it exposed. But with a grand jury’s decision this week not to indict Wilson for Brown’s killing, prosecutors released thousands of pages of testimony, interviews and documents that shine new and often harsh light on the events that unfolded in this suburb’s darkest hours. (AP Photo/St. Louis Post-Dispatch, David Carson, File)

ST. LOUIS (AP) — A police interview with a key witness was not provided along with the thousands of documents released after a grand jury decided to not indict a Ferguson police officer in the fatal shooting of Michael Brown.

An Associated Press review of the records released by St. Louis County Prosecuting Attorney Bob McCulloch confirms a report by KDSK-TV that a transcript of the two-hour interview by the FBI and a county police detective with Brown’s friend Dorian Johnson was not included.

The prosecutor’s office did not respond to requests for comment Monday.

McCullough took the unusual step of sharing information shown to the secret panel once the jury determined that Ferguson officer Darren Wilson should not stand trial in Brown’s death.

He provided transcripts of 24 witness interviews.