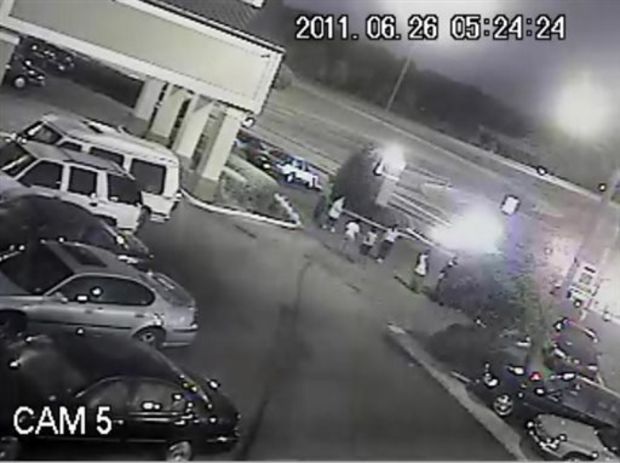 In this June 26, 2011 frame grab from a security video, people gather in a parking lot next to the Jackson, Miss., street where James Craig Anderson, a 49-year-old black man was allegedly run down by a pickup truck driven by Deryl Dedmon, a white teen. At least one of the four people indicted in a series of racial beatings of blacks is in talks with prosecutors about pleading guilty. Tom Fortner, the lawyer for Sarah Adeila Graves, said Friday, Dec. 5, 2014 that plea talks are at a “critical” stage and could be resolved within the next several weeks. Six men pleaded guilty earlier in the investigation, sparked after James Craig Anderson was run over by a truck and died in June 2011. (AP Photo)

JACKSON, Mississippi (AP) — At least one of the four people indicted in a series of racial beating of blacks is in talks with prosecutors about pleading guilty.

Tom Fortner, the lawyer for Sarah Adeila Graves, said Friday that plea talks could be resolved within the next several weeks.

“We’re in a critical stage of the discussions right now and I can’t really tell you what’s going to happen,” Fortner said.

Graves, along with John Louis Blalack, Robert Henry Rice, and Shelbie Brooke Richards face charges including conspiracy and committing a hate crime. Prosecutors say they made trips to Jackson to assault African-Americans.

Blalack’s lawyer said all other defendants could reverse their not guilty pleas before a Jan. 26 trial.

Lawyers for Rice and Richards did not return calls and emails this week.

The indictments, unsealed in July, were the latest in a three-year investigation into reports that groups of young white men and women would drive from the mostly white Rankin County into majority-black Jackson to assault blacks.

The inquiry was sparked by the June 2011 death of James Craig Anderson, who was run over by a pickup truck outside a Jackson hotel. The assault on Anderson was caught by a hotel surveillance camera. It received widespread attention after the video was obtained by news organizations, including The Associated Press.

The indictment says Blalack, Graves and Richards were present the night Anderson died. Apart from Anderson’s death, prosecutors say at least two other assaults occurred, in addition to an attempted assault. Other victims have not been publicly identified.

Six other men have already pleaded guilty in the investigation. All still await sentencing, although some pleaded guilty almost two years ago, a sign that prosecutors may want them to testify against remaining defendants.

Prosecutors said the suspects usually sought out people who were homeless or drunk. Other than Anderson, blacks assaulted have not been identified. Prosecutors said assailants used their fists, beer bottles, sling shots and vehicles in the attacks.

Waller made his statement while objecting to a 91-item jury questionnaire proposed in November by federal prosecutors.

Prosecutors want to ask more than 15 questions about prospective jurors’ race-related actions and feelings. For example, they propose asking if a person has ever been a member of groups ranging from the Nation of Islam to the Association for the Preservation of the White Race.

Waller wrote that proposed questions are overly intrusive and seek to improperly limit and influence the jury pool.

“The proposed jury questionnaire is extremely self-serving to the government and serves to incite and inflame the passions of the jury, especially the questions relating to civil rights,” he wrote.