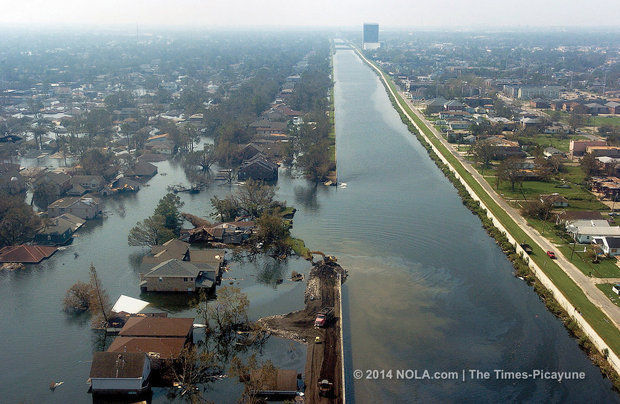 The 17th street canal breach, which formed during Hurricane Katrina, seen from the air on Sept. 3, 2005. (Photo by Brett Duke, NOLA.com | The Times-Picayune archive)

NEW ORLEANS (AP) — More than nine years after the levees broke during Hurricane Katrina and flooded New Orleans, residents and businesses finally can ask for some compensation — albeit small — from a $14 million settlement fund set up to pay for the catastrophic flood.

The payouts, though, will be meager and far from what residents may have hoped for after their city was devastated in 2005.

Hopes for hefty damage payments were dashed in the years after the hurricane when lawsuits suing the Army Corps of Engineers were defeated in federal court. The courts held that the federal agency was protected from liability by a 1928 law that gave the agency immunity from suits seeking damages over failed flood-control projects.

This money comes from a separate settlement that plaintiffs’ lawyers reached in 2009 with three levee boards in New Orleans, Jefferson Parish and St. Bernard Parish. The levee boards were responsible in part for the upkeep of the structures that broke during Katrina.

Under this settlement, residents, businesses and people visiting the city when Katrina struck can apply now for compensation. The money comes from insurance policies the levee boards had at the time of Katrina. Claims must be filed by April 30, 2015. A federal judge recently gave his approval to how the money can be divided.

Gerald Meunier, a New Orleans lawyer who helped handle the class-action lawsuits over the flood, said the settlement is as much money as can be gotten from the boards’ insurance policies. He added that under the law, the levee boards’ assets could not be seized.

“We can’t get a dime more from the levee districts,” Meunier said. “It’s obviously not enough. It can never make up for everything people went through.”

He said the plaintiffs’ lawyers did everything they could to win more for the city’s residents, but that the federal courts affirmed the Corps’ immunity.

Residents and businesses flooded in New Orleans, St. Bernard and Jefferson are eligible for money.

People also can claim compensation for the death of a family member. Claims for deaths will receive between $255 and $1,020.

After lawyer and administrative costs are factored in, there will be about $14 million left for residents and businesses. Lawyers who handled the case are expected to divide up $3.5 million among themselves to pay for costs they incurred. The lawyers who handled the case waived their fees. In all, the lawyers say they spent more than $13 million on litigating the cases.

“We took a beating,” said Joseph Bruno, a plaintiffs’ lawyer.