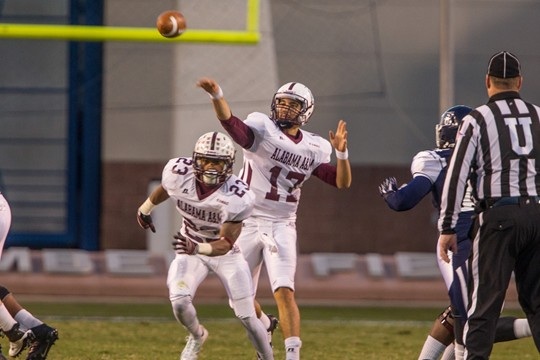 Leachman threw touchdowns of 60 yards to Jonathan Dorsey and 25 yards to Montaurius Smith for a 16-7 halftime lead.

A holding penalty by Jackson State that resulted in a safety and Leachman’s 44-yard touchdown connection with Dorsey put Alabama A&M (4-5, 3-3 Southwestern Athletic Conference) ahead 25-7.

La Montiez Ivy hit Jairus Moll for a 34-yard score early in the fourth quarter. Jackson State (3-6, 1-5) threatened late, but couldn’t convert a fourth-and-3 at the Bulldog 14 with six minutes left. Ivy drove the Tigers to the Bulldog 21 on the next series, but his pass was intercepted by Harvey Harris.

Ivy had 349 yards on 36-of-53 passing with two touchdowns and two interceptions. Dan Williams had 108 yards receiving and a touchdown.

Ole Miss’ Hugh Freeze on National Signing Day haul: ‘Could be our best since I’ve been here’

February 6, 2015 Online Editor Sports Comments Off on Ole Miss’ Hugh Freeze on National Signing Day haul: ‘Could be our best since I’ve been here’

OXFORD, Miss. (AP) — Mississippi coach Hugh Freeze has never been shy about chasing some of the nation’s top prospects, no matter what other big-name programs are in pursuit. That approach helped the Rebels grab […]

By Monica Land JACKSON – With the recent donation of $10,000, a life-sized statue honoring the late civil rights icon Fannie Lou Hamer is moving closer to reality. An additional $25,000 is needed to complete […]