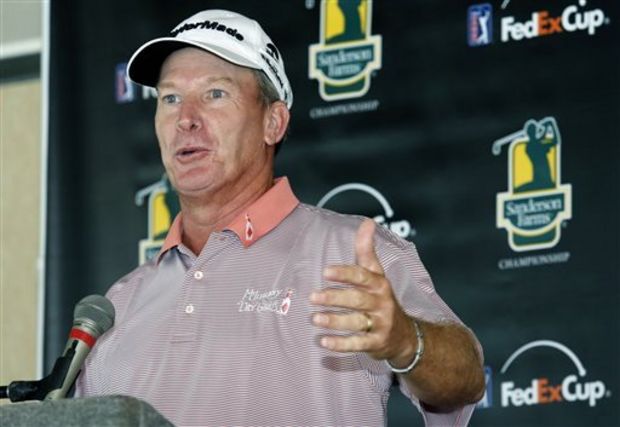 Woody Austin, the 2013 Sanderson Farms Championship winner, discusses the PGA Tour event during a Media Day lunch at the Country Club of Jackson, where the tournament has relocated, Monday, Sept. 22, 2014, in Jackson, Miss. After 18 years at Annandale Golf Course in Madison, the state’s only regular PGA Tour event relocated to Jackson for tournament play Nov. 6-9. Austin was in Jackson to participate in the Media Day activities including playing a few holes of golf with reporters. (AP Photo/Rogelio V. Solis)

In Ellisville, police says a Jones County Junior College student has been arrested on a charge of possession of a weapon on the Ellisville campus.

The college says campus police working with Ellisville police made the arrest.

Police did not identify the type of weapon Jones allegedly possessed.

In Brandon, former State Sen. John Ed Lee of Brandon, a businessman who served two terms in the state Senate including four years as chairman of the Highways Committee, has died at the age of 86.

Officials at Ott and Lee Funeral Home in Brandon say Lee died Monday. Other details were not released.

Services are at 2 p.m. Thursday in the chapel of Ott and Lee Funeral Home in Brandon with burial in Morton Memorial Gardens.

A Scott County native, Lee was a retired car dealer in Forest.

Lee served in the Senate from 1976-1984 representing Scott and Newton counties. He was defeated in a race for re-election in 1983.

Survivors include his wife, Fay; a son and a daughter; and two grandchildren.

In Jackson, residents have approved liquor sales at restaurants on the Rankin County side of the Ross Barnett Reservoir.

Complete but unofficial returns show more than 80 percent of those voting Tuesday approved the liquor sales.

Eligible voters were residents who live on property owned by the Pearl River Valley Water Supply District and who were registered to vote.

Only establishments that receive 60 percent of their revenue from food sales are eligible to sell liquor by the glass.

The Madison County side of the reservoir already has qualified resort status.

In Hattiesburg, the Hattiesburg Police Department will now notify the local school district when a juvenile has been arrested and charged as an adult.

The Hattiesburg American reports the new policy comes after the school district wasn’t told a 14-year-old ninth-grader had been charged as an adult for sexual battery of a child under the age of 14. The district learned of the arrest from another student’s parent.

The ninth-grader was arrested in April. The parent complained in August.

“The new policy that has been put into place with the Hattiesburg Police Department is that, if a juvenile is arrested for a crime and they are charged as an adult, we will contact Hattiesburg Public School District’s (school) resource officers and advise them of that arrest,” police department spokesman Lt. Jon Traxler said Tuesday.

School Superintendent James Bacchus said once the district knew about the student, it acted immediately.

“Once we found out, we took the appropriate action,” he said. “It wasn’t lack of action. It was lack of information.”

School district spokesman Jas N Smith would not say what action the district took because the matter is related to student discipline.

In Greenville, the American Queen riverboat will dock at Greenville the first week of November.

Memphis, Tennessee-based American Queen Steamboat Co. announced in August that Greenville will be one of the steamboat’s five ports of call next year on cruises between New Orleans and Memphis. Greenville is replacing Helena, Arkansas.

Mayor John Cox tells the Delta Democrat Times (http://bit.ly/1pqrmst ) the Nov. 2 “test docking” will gauge local interest in the cruises. November’s visit will be the American Queen’s first to Greenville.

The company is working out the details for its 2015 itinerary.

A separate riverboat company, Guilford, Connecticut-based American Cruise Lines Co., arrived in Greenville on Aug. 19 during a weeklong St. Louis to New Orleans cruise to gauge passenger interest. A decision on whether the company’s Queen of the Mississippi will make regular stops here in 2015 is expected by year’s end.

Both companies’ interest in Greenville was sparked by inquiries Cox made this year in a bid to again make the city a regular port of call for cruise ships plying the Mississippi River, something that hasn’t occurred on an annual basis in a decade.