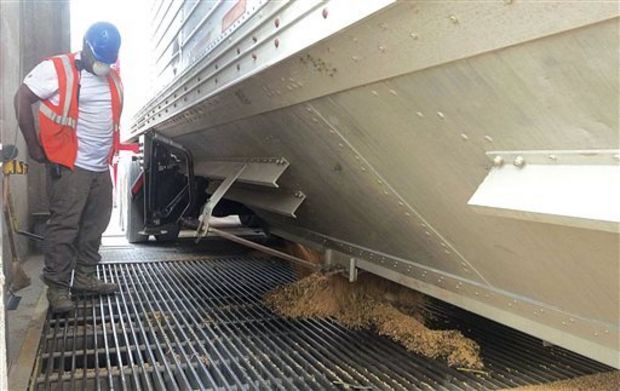 Spanky Morris, a “dumpman” at Farmers Grain Terminal in Greenwood, Miss., supervises the unloading of soybeans into the elevator’s massive chute on Monday, Sept. 15, 2014. Corn harvesting is three-fourths completed in the Delta, but just 25 percent of the area’s soybeans have been harvested. High demand for soybeans on the world market means that most of this year’s crop will be bound for export. (AP Photo/The Greenwood Commonwealth, Bob Darden)

Here are some news and notes from around Mississippi:

In McComb, authorities in Pike County said a man was injured Tuesday when a neighbor attacked him with a sword.

Sheriff’s deputies told The Enterprise-Journal they were called to a disturbance on Morgantown Road just east of McComb at about 1:35 a.m.

Chief Investigator Lance Falvey said 39-year-old Dennis Bell was severely injured with multiple cuts to the upper portion of his body. He was taken to Southwest Mississippi Regional Medical Center. His condition was unavailable.

Falvey said Bell and his roommate, Kendrick Pittman, were in their front yard when they began arguing with Williams.

Williams allegedly retrieved a decorative Samurai sword and attacked both men, cutting Pittman on the wrist and more seriously injuring Bell. Falvey said Pittman’s injuries were less severe and he was treated at the scene.

The reason for the alleged attack remains unclear, but Falvey said alcohol was a factor.

Investigators seized the sword. Falvey said it was bent in the attack, an indication it was ornamental and not intended to be a weapon.

The Vicksburg Post reports that about 20 people attended the small wedding Monday at Triumph Church.

The bride’s daughter, Brittany, was maid of honor, while state Rep. Ed Blackmon Jr. of Canton stood as best man for his former House colleague.

The 61-year-old mayor, who divorced several years ago, says he had been single long enough and wanted to set an example for young men.

In Hattiesburg, state and local officials broke ground Wednesday for a new three-story facility that will house the College of Nursing at the University of Southern Mississippi.

The $31 million Asbury Hall is scheduled to be completed in 2016 on the western end of campus in Hattiesburg. Dr. Katherine Nugent, dean of the College of Nursing, said it will help in recruiting new students.

“This has been an eight-year journey,” Nugent said. “I remember being told a new building for the College of Nursing was not going to happen. People who know me also know that I’m not the most patient person. Well, here we are. … This is the result of patience, persistence, sharing our story and a lot of support.”

Troopers tell WCBI-TV the body of Britney Benett was found in the upside-down car early Wednesday about half a mile from County Road 151.

Investigators believe the crash happened Tuesday night. They say it appears Benett’s Ford Focus left the highway and flipped when she over-corrected to return to the roadway.

The crash remains under investigation.

In Natchez, Callon Petroleum Co. has raised $122 million from a stock sale, with plans to use the proceeds to pay for new oil and gas properties it plans to buy in the Permian Basin of west Texas.

The Natchez-based company announced Monday it has sold 14.38 million shares at $9 per share, paying about $7 million for an underwriters’ discount and expenses.

Callon also plans to borrow money to pay for the acquisitions, including a $213 million deal to buy rights to drill in 6,200 acres in the Permian Basin. The company says the acreage has 4 million barrels in proven reserves. Callon says the acquisition has sites for more than 400 horizontal wells.

Callon also is buying 577 acres in a separate deal.