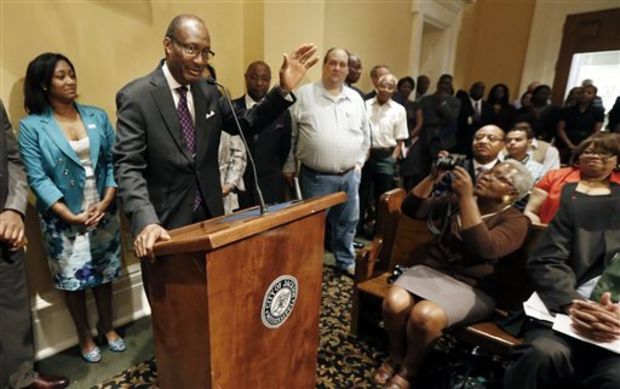 Rev. Jerry Young, pastor of New Hope Baptist Church in Jackson, Miss., addresses a filled City Council chambers as he responds to being honored by the Jackson City Council on his recent election as president of the National Baptist Convention, USA, Inc., Tuesday, Sept. 9, 2014. Young is the first Mississippian to lead the largest predominantly black Christian denomination in the U.S. with an estimated 7.5 million members. (AP Photo/Rogelio V. Solis)

In Jackson, Rev. Jerry Young, pastor of New Hope Baptist Church in Jackson, Miss., addresses a filled City Council chambers as he responds to being honored by the Jackson City Council on his recent election as president of the National Baptist Convention, USA, Inc., Tuesday, Sept. 9, 2014. Young is the first Mississippian to lead the largest predominantly black Christian denomination in the U.S. with an estimated 7.5 million members.

In the Cotton Plant community, Tippah County Sheriff Karl Gaillard says a drug seizure has yielded approximately 165 marijuana plants, along with other contraband.

Gaillard says the plants were spotted from a helicopter flying above the three properties from which they were harvested. No arrests have yet been made.

In Houston, the Mississippi Department of Environmental Quality says it will begin testing water quality in Chico Creek in Chickasaw County near Houston on Wednesday.

Authorities tell WCBI-TV that one of the tests uses a dye that will temporarily color the water red.

Officials say the dye is a non-toxic biodegradable chemical, is safe for contact with humans and aquatic life and is approved for this use by the Environmental Protection Agency.

Local residents are urged to avoid the water. Officials say the dye may stain clothing and shoes.

In Tupelo, city officials say they’re deciding whether to require demolition of buildings damaged by the April 28 tornado on a case-by-case basis.

Last week, the City Council ordered the owner of the Comfort Suites hotel in the hard-hit North Gloster Street commercial corridor to tear down the four-story building and clear debris within 120 days.

Development Services Director Shane Hooper told the Northeast Mississippi Daily Journal that the city is communicating with property owners constantly to get updates on their plans.

“We’re constantly in communication with the property owners and getting updates on their plans,” he said. “In fact, we’re again contacting as many of them as we can (Monday) to get an idea of where they are in the process. .we know everybody’s situation is different, which is why we have to look at each situation individually.”

The request to take down the Comfort Suites was made out of a regard for caution, officials said. The hotel, while fenced off, is accessible by more than one entry point into the rest of the building.

“It’s also a wood-framed structure and it’s been open to the elements since April 28,” Hooper said.

Magnolia Bingo, a 22,000-square-foot building nearby, was side-swiped by the tornado and suffered significant damage. But the building hasn’t been condemned by the city for good reason, Hooper said.

“The biggest difference is that it’s a one-story building with no access to it,” he said. “It’s been boarded up. In addition, it’s a steel-framed building, not wood.”

In Natchez, Callon Petroleum Company is selling stock to pay for new oil and gas properties it plans to buy in the Permian Basin of west Texas.

The Natchez-based company announced Monday that it would sell 12.5 million shares, giving the brokerages underwriting the sale the option to buy up to another 1.875 million shares.

At current prices, Callon could net more than $130 million from the stock sale. It also plans to borrow money to pay for the acquisitions, including a $213 million deal to buy rights to drill in 6,200 acres in the Permian Basin. The company says the acreage has 4 million barrels in proven reserves. Callon says the acquisition has sites for more than 400 horizontal wells.

Callon also is buying 577 acres in a separate deal.

The university will name its high performance computing center after Malcolm Portera, its president from 1998 to 2001. He went on to be chancellor of the University of Alabama System. Portera was an advocate for what became MSU’s High Performance Computing Collaboratory and has served as a workforce development consultant to Golden Triangle Development Link since retiring.

MSU will name the Agricultural and Biological Engineering Building for Charles Lee, president from 2003 to 2006, and interim president for a year before that. The building was constructed while Lee was president. He was earlier vice president for agriculture, forestry and medicine and dean of the College of Agriculture and Life Sciences.

The College Board approved the namings last month.