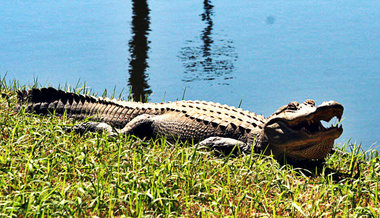 The Mississippi Supreme Court has ruled Exxon is not responsible for alligators at its waste site in Wilkinson County.
File Photo/Gulflive.com

JACKSON, Mississippi (AP) — A divided Mississippi Supreme Court has ruled that Exxon Mobil Corp. can’t be held liable for the presence of alligators at a waste site it owns in Wilkinson County.

The oil giant had been sued by a couple — Tom and Consandra Christmas — who had planned to build a house on an adjoining parcel. However, the couple said that when they began clearing land, they discovered the property was infested with alligators.

The court, in a 5-4 ruling released Thursday, found a trial court was correct to dismiss the case. The Christmases had claimed Exxon had introduced the alligators. But the majority found that there’s no evidence the current alligators are descended from those introduced. The court also ruled that landowners can’t be held responsible for wild animals.