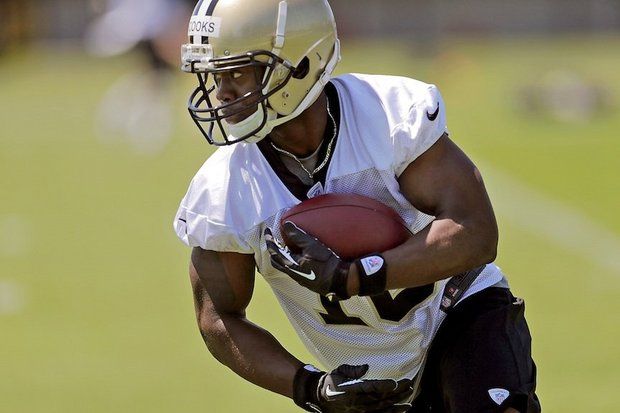 “I was like, ‘Ooh. This guy opens your eyes,'” Ryan said Saturday. “You can certainly feel his speed. … They’re going to create roles to get this guy involved and it’ll be awesome.”

Cooks, who won the 2013 Biletnikoff award as the top receiver in college football, isn’t sure why none of the first 19 NFL teams with a draft pick wanted him. The former Oregon State star — who caught a 128 passes for 1,730 yards and 16 touchdowns last season — was finally taken 20th overall when the Saints traded up from their original No. 27 slot.

Cooks figures some teams had misgivings about his relatively small 5-foot-10, 190-pound frame, though he likes to think his versatility, technique, toughness and speed make up for that. His time of 4.33 seconds in the 40-yard dash at the NFL scouting combine in Indianapolis was the fastest of any receiver there.

In any event, Cooks talks as if he got a break by falling just far enough to go to New Orleans, where coach Sean Payton has built a regular playoff contender and designed one of the most prolific passing offenses in the NFL.

“The mind that he has for this game and this offense, his coaching ability, how creative he is, and putting guys in position to succeed in his offense is just very exciting to me,” said Cooks, who also expects chances to work as a punt and kickoff returner. “Out of all the receivers (in the draft), I feel like I got the best fit.”

For now, Cooks is catching passes from Logan Kilgore of Middle Tennessee State, Jordan Jefferson of LSU or Rusty Smith, who has been primarily with the Tennessee Titans since turning pro in 2010.

Cooks plans to return to Oregon State on Sunday night to finish out the school year before returning to the Saints in June, when he’ll be able to start working with record-setting quarterback Drew Brees — yet another reason why Cooks likes where he landed.

“Look at Drew Brees’ stats. He’s getting the ball to all of his wide receivers,” Cooks said. “As a receiver, when you see that, you get excited.”

Cooks joins a team looking to fill a couple holes on offense, namely because of the trade of Darren Sproles to Philadelphia and the release of receiver Lance Moore, who has since signed with Pittsburgh.

Cooks sees himself as a play-maker who can line up wide or in the slot and even take handoffs on sweeps and end-arounds, as he sometimes did in college.

“He is versatile,” Payton said. “He’s obviously a receiver and I think we can line him up in the slot, line him up outside. He’s got a very good skill set with regards to his acceleration, his speed. He catches the ball well. I like his toughness. He’s handled these first three practices well.”

Cooks said the early transition to the Saints’ offense has been “not bad at all” because a number of formations, terminology and receiving routes are similar to those at Oregon State. He figures NFL defensive backs may try to play him tight off the line of scrimmage and knock him off of his routes, but foresees no problem adjusting to that, either.

“My quickness is most corners’ nemesis,” Cooks said. “When they’re trying to press me, I’ve got to use my special abilities and that’s being quick coming off the line.”

They Saints “wouldn’t have drafted me if they didn’t feel like I could come in and make an immediate impact,” Cooks added. “I know that, and that’s what I’m putting on my shoulders.”

Notes: Jefferson was one of two former LSU players attending Saints rookie camp on a try-out basis. The other was fullback Jacob Hester, who previously played for San Diego and Denver. “He is smart. He is very instinctive. You can see that,” Payton said of Hester. “He makes good decisions at the snap of the ball. He rarely does the wrong thing.” … Alabama safety Vinnie Sunseri, drafted in the fifth round, has been able to participate in the non-contact rookie camp about six months after reconstructive knee surgery. “For the most part, with what we are doing out here, he is looking good,” Payton said. … Former Tulane defensive back Derrick Strozier is at Saints rookie camp on a tryout basis, but practicing as a running back, the position at which he first joined the Green Wave. Payton said Strozier had been “impressive” during the first three practices of rookie camp, but was excused Saturday afternoon to attend his graduation at Tulane.