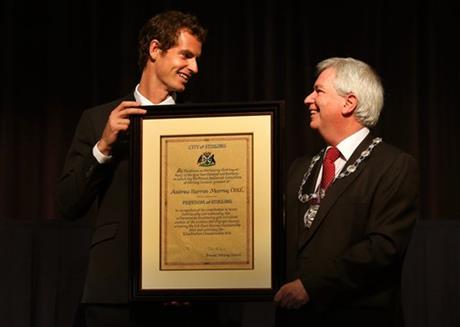 British tennis player Andy Murray, left, receives the Freedom of Stirling presented to him by Stirling Council Provost Mike Robbins during a special council meeting at his old school Dunblane High, in Dunblane, Scotland, Wednesday, April 23, 2014. Murray said he feels honored to receive the freedom of Stirling and an honorary degree from the university where he trained as a boy. (AP Photo/PA, Andrew Milligan)

LONDON (AP) — Total prize money for this year’s Wimbledon tournament will reach 25 million pounds ($42 million), an increase of 10.8 percent that will mostly favor the early-round losers.

The All England Club said Tuesday that the men’s and women’s singles champions will each receive 1.76 million pounds ($2.9 million), a 10 percent increase on last year’s top prize won by Andy Murray and Marion Bartoli.

But the main increases are for the early losers, with players who fail to get past the third round receiving prize money worth 12.5 percent more than in 2013.

“We’ve placed emphasis on the large group of players who need our help the most, those players who lose in qualifying and in the early rounds of the championships,” Wimbledon chairman Philip Brook said. “We also had an eye to being competitive internationally, and we do keep our watch on what is going on in other tennis events and in particular the other Grand Slams.”

The grass-court Grand Slam will be played from June 23-July 6.

In keeping with player demands for a larger slice of Grand Slam revenues, all four majors have greatly increased their prize money in the past two years, with Wimbledon offering the biggest amount following a record 40 percent increase last year.

The French Open now offers more than 25 million euros ($34.5 million) while the U.S. Open increased its purse to $34.3 million and the Australian Open went up to AU$33 million ($31 million).

The Wimbledon prize money for the majority of singles players who lose in the first three rounds of the grass-court tournament has been increased by more than 100 percent over a three-year period. The main increase this year is for first-round losers, with each receiving 27,000 pounds ($45,450), 14.9 percent more than last year.

There will also be an increase of 8.7 percent in prize money for doubles and a 6.1 percent increase for mixed doubles.

In all, an extra 2.4 million pounds ($4 million) is up for grabs compared to last year.