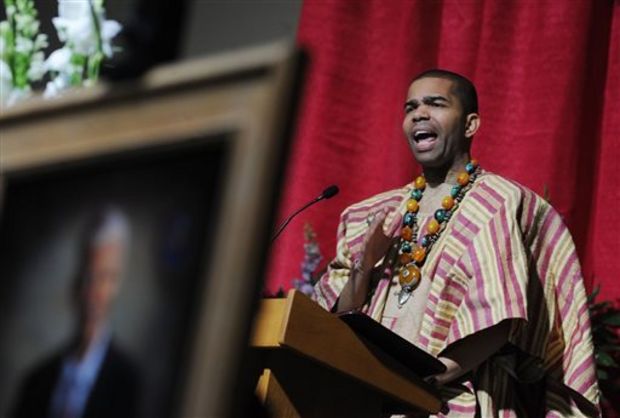 Chokwe Antar Lumumba, youngest son of late Jackson Mayor Chokwe Lumumba, stands near a portrait of his father while delivering a eulogy during the mayor’s funeral service at the Jackson Convention Complex Saturday, March 8, 2014. (AP Photo/ The Clarion-Ledger, Joe Ellis)

JACKSON, Mississippi (AP) — City Council member Tony Yarber and Chokwe Antar Lumumba, son of the late Mayor Chokwe Lumumba, will be in an April 22 runoff to see who will become Jackson’s next mayor.

Complete, but unofficial, returns from Tuesday’s election show only 10 votes separate the two. Affidavit and absentee ballots are still to be counted.

Thirteen candidates were on the ballot, including former Mayor Harvey Johnson and two other city council members and state Sen. John Horhn.

The election came one month after the funeral of the elder Lumumba, who was elected last June and died Feb. 25.

The candidates ran without party affiliation. The winner will complete late mayor’s term.

The younger Lumumba, an attorney, said the next two weeks will be spent getting out and communicating his vision to the people.

“We want to make sure our message is clear,” he said. “If the people didn’t know our message that was our fault.”

Yarber said his experience as a second-term council member is a plus, but also he believes the people of Jackson are ready for his plan to make changes faster and move the city forward.