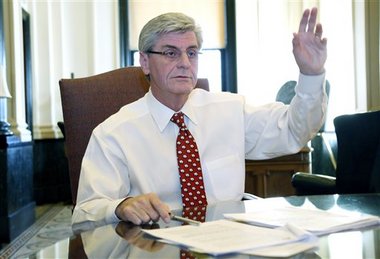 JACKSON, Mississippi (AP) — Gov. Phil Bryant has declared a state of emergency in 12 Mississippi counties that have suffered impacts from flooding and severe storms that moved through the state beginning April 3.

The state of emergency was issued Tuesday. It is an administrative tool that authorizes the use of additional state resources to aid in storm response efforts.

Chickasaw, Covington, Hinds, Holmes, Jones, Kemper, Marion, Neshoba, Newton, Noxubee, Simpson and Yazoo counties are included in the declaration. The declaration can be expanded if needed.

“Multiple counties in Mississippi have been impacted by these storms. High water remains in many areas and could continue to rise if we see additional rainfall. Residents should avoid floodwaters and take all necessary safety precautions,” Bryant said in a statement.

The Mississippi Emergency Management Agency and other state agencies are working to assist the counties and residents that have been impacted, Bryant said.

In a bit of good news, the Highway Patrol says U.S. Highway 49 and Mississippi Highway 13 in Simpson County south of Jackson have reopened.

Other closings remain. The Mississippi Department of Transportation said state Highways 149 and 540 are closed because of flooding from the Strong River and Dabb’s Creek as do state Highway 427 south of Edinburg in central Mississippi and U.S. Highway 80 at the Chunky River in east Mississippi.

Is Mississippi next? Maryland under pressure to lift constitutional ban on atheists holding office

December 19, 2014 Online Editor Religion Comments Off on Is Mississippi next? Maryland under pressure to lift constitutional ban on atheists holding office

ANNAPOLIS, Md. (AP) — Some freedom-from-religion advocates are pressing Maryland and six other states to remove provisions from their state constitutions that prohibit people who don’t believe in God from holding public office. The other […]

Gov. Phil Bryant told approximately 350 attendees last week that he has a goal to try and decrease teen pregnancy by 15 percent by 2017. The Governor was the keynote speaker at his Healthy Teens for a Better Mississippi first Teens Pregnancy Prevention Summit, Dec. 6, at the Jackson Convention Complex.

He said many, early on, tried to discourage him from setting such a big goal…. […]