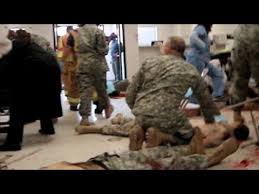 McCOMB, Mississippi (AP) — The wife of a soldier from McComb, Miss., says he is among 16 people wounded by a soldier who killed three others and himself at Fort Hood, Texas.

Renee Powell Westbrook told The Associated Press on Thursday that her husband, Sgt. Jonathan Westbrook, was among those shot in Wednesday’s rampage.

He was among six of the injured soldiers who remained hospitalized Thursday in Texas. His wife said he was recovering from wounds to the chest and neck.

MCCOMB, Miss. (AP) – Deputies in Mississippi found the bodies of two people killed by gunshots to the head, and say it appears to be a murder-suicide. Pike County Chief Investigator Chris Bell tells news […]

MCCOMB, Miss. (AP) – A McComb man has been arrested on a homicide charge for a weekend accident that left a toddler dead and her mother injured. Lt. Mike Roberts says 28-year-old Johnathan McCaskill’s pickup […]

MCCOMB, Miss. (AP) – A Mississippi lawmaker will get to keep his state House seat after a judge dismissed a challenge from his opponent in the 2015 Democratic primary. The Enterprise-Journal reports that Circuit Judge […]