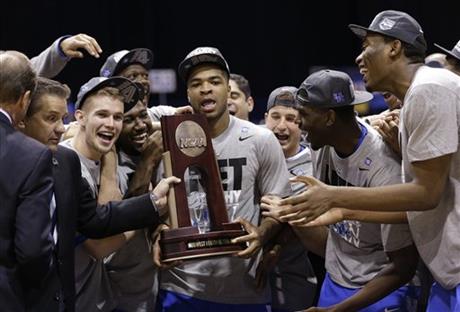 The road to redemption goes through North Texas for a fearsome Final Four of power programs with something to prove.

Florida, the top overall seed, returns to the Final Four for the first time since winning consecutive titles in 2006-07, this time without all those first-round NBA picks.

Waiting for the Gators at Jerry Jones’ billion-dollar stadium on Saturday will be Connecticut, back near the top of the bracket under Kevin Ollie after being barred a year ago for academic problems.

Wisconsin and coach Bo Ryan will be there, too, finally in the Final Four after so many near-misses. Bo knows the Final Four — even if his father won’t be there to join him this time.

Facing the Badgers in the other national semifinal will be all those Kentucky kids, once written off as too young and inexperienced to play for a title before they head off to the NBA.

This Final Four contains no upstarts or mid-major party crashers, just big boys with big chips on their shoulders.

Donovan won a pair of national titles in Gainesville with Joakim Noah, Corey Brewer and Al Horford, all top-10 NBA picks in the 2007 NBA draft. After that second title, he accepted the head-coaching job with the NBA’s Orlando Magic, then changed his mind after the introductory news conference.

Donovan continued to produce winning teams at Florida, but the biggest wins eluded the Gators. They lost in the regional final each of the past three seasons.

That changed when the ferocious Gators (36-2) rode their chomping defense through a 30-game winning streak capped by Saturday’s 62-52 win over bracket darling Dayton.

“We didn’t start off the exact way that we should have, but coach Donovan continued to remind us and humble us and help us see that, in order to get where we want to get to, the end goal, we have to continue to chase greatness every single day and stay in the moment,” Florida forward Patric Young said.

To win another title, the Gators will have to go through the last two teams to beat them this season (UConn and Wisconsin) or their biggest SEC rival (Kentucky).

Things went sour in Storrs after that. Calhoun retired in 2012 and UConn was barred from the NCAA tournament last season for failing to meet the NCAA’s academic progress measure.

UConn’s upperclassmen decided to stick it out instead of transferring and put together another magical bracket run behind another do-it-all-player, former Walker understudy Napier. With their 60-54 win over Michigan State on Sunday, the Huskies (30-8) became the first No. 7 seed to reach the Final Four since the tournament expanded to 64 teams in 1985.

“We play a great Florida team and we’re going to be well prepared, because I know about these guys’ heart, and that’s what got us through,” Ollie said.

Wisconsin’s tell-it-like-it-is coach had been a regular at the Final Four, taking his father, Butch, to every one since 1976 as a birthday gift.

Bo had a hard time getting there with his team, though, winning over 700 games, playing in the NCAA tournament 13 straight years and reaching the Sweet 16 six times — and not one trip to the Final Four.

Bo and Badgers (30-7) get their chance now after pulling out an emotional 64-63 win over top-seeded Arizona in the West Regional final on Saturday, which would have been Butch Ryan’s 90th birthday.

“I can remember some of the great teams that he had of kids and their first championships and how they acted and just the joy,” Ryan said. “These guys have had some others, but that’s all I wanted to see.”

Rounding out this foursome could be the most fearsome bunch of the bracket.

Kentucky won the 2012 national championship behind coach John Calipari’s get-the-best-players-no-matter-how-long-they-stay philosophy. Cal brought in another heralded group of one-and-doners and they were touted as the team to beat, ranked No. 1 in the preseason.

After a string of losses, including three in five games, the kid Cats were out of the polls and supposedly out of contention.

Well, look at them now.

Showcasing their talent and depth, the Wildcats (28-10) are playing with a cohesiveness and confidence that wasn’t there earlier in the season, racing into the Final Four after pulling out a last-second victory over Michigan.

“I can’t believe it; we went through so much,” said Kentucky’s Aaron Harrison, who hit a 3-pointer with 2.3 seconds left in the 75-72 win over the Wolverines. “We went through a lot of ups and downs, and we’re blessed to be going to the Final Four.”

They are not alone.