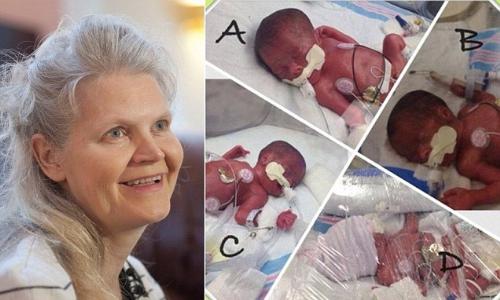 JACKSON, Mississippi (AP) — The Mississippi woman who gave birth to identical quadruplets more than a week wants to get four girls home.

Kimberly Fugate was expecting triplets when she went to the University of Mississippi Medical Center in Jackson, Miss. The babies, all girls, arrived Feb. 8, just shy of 13 weeks premature. For now she looks at them as they sleep in incubators.

“It was one surprise after another,” she has said in interviews. “They had delivered three babies and I heard them say ‘More feet’ and I said ‘No.'”

It’s been a whirlwind since. UMMC has been deluged with media calls and well-wishers.

Fugate and her husband, Craig, started a Facebook page “Fugate Quadruplets” with pictures for the four girls and their sister, 10-year-old Katelyn.

Doctors at UMMC said the girls will be expected to say in the natal intensive care unit until their original due date, which for the Fugates is May 2. But when they go home will depend on how the babies develop over the next 3 months.

Dr. James Bofill, professor of maternal fetal medicine, said the odds of spontaneous quadruplets are 1 in 729,000. But in the Fugates’ case, the odds are even smaller because their girls split from a single fertilized egg.

The girls, were all 14 inches long and weighed between 2 pounds 1 ounce and 2 pounds 8 ounces when they were born.

Fugate has been staying at the Ronald McDonald House to be near the girls. The family lives in Jayess in southwest Mississippi.

Healthy homes build healthy communities. That’s why four major health care institutions in the Metro Jackson area are joining together to build a healthy home for a local family.

This is the first time health care institutions in the area have collaborated to build a Habitat for Humanity/Metro Jackson home…. […]

As cameras and microphones edged in and the room grew quiet, University of Mississippi Medical Center transplant surgeon Christopher Anderson turned to face Karen Battle and her new liver.

It was a spotlight moment 22 years in the making. When Battle, a lifelong south Jackson resident, got a new liver in March, it signaled new life not just for the 36-year-old mom, but for UMMC’s long-dormant liver transplant program.

“I feel like I’ve won the lottery,” said Battle, sitting in a wheelchair, her hands folded and a soft smile on her face. “I feel like my life is a new adventure.” […]