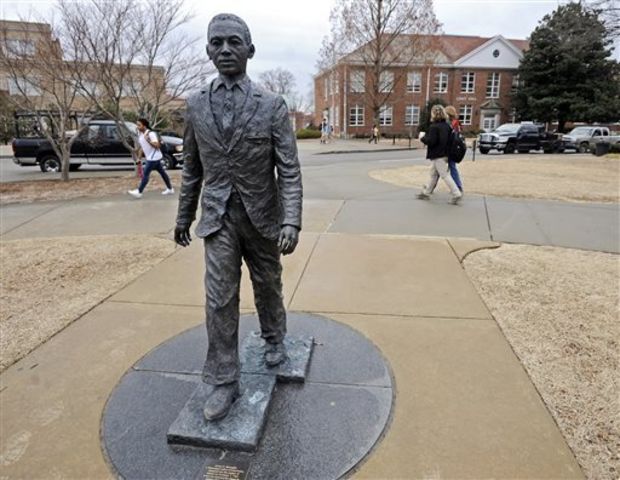 OXFORD, Mississippi (AP) — The FBI on Tuesday was helping investigate who tied a noose around the neck of a University of Mississippi statue of James Meredith, who, in 1962, became the first black student to enroll in the then all-white Southern college.

University police on Sunday morning found the rope noose and, on the statue’s face, a pre-2003 Georgia state flag with a Confederate battle symbol, said campus police Chief Calvin Sellers. Two men were seen near the statue early Sunday and investigators were looking at surveillance footage.

“It’s a racial hate crime,” Mississippi NAACP president Derrick Johnson said Tuesday after a news conference at the state Capitol in Jackson. “At what level do they get prosecuted? I don’t know. But as long as we tolerate hate, we will continue to revisit history and the past of this state, and at some point we must move forward.”

In a statement, Chancellor Dan Jones condemned the action as contrary to the beliefs and values of the university community.

“These individuals chose our university’s most visible symbol of unity and educational accessibility to express their disagreement with our values,” Jones said. “Their ideas have no place here, and our response will be an even greater commitment to promoting the values that are engraved on the statue — Courage, Knowledge, Opportunity, and Perseverance.”

University police asked for the FBI’s help, said Deborah R. Madden, a spokeswoman for the Mississippi FBI office in Jackson.

About 150 Ole Miss students, black and white, rallied around the Meredith statue Tuesday to protest the vandalism, according to Charlie Mitchell, a journalism professor who attended the event. They held posters with several hand-written slogans, including, “Justice for African-Americans,” ”Respect the Students” and “This is Our University.” One poster said: “The actions done in the cowardly dark will never diminish the light of James Meredith’s legacy nor our creed.”

Johnson said there is a problem with Old South imagery at Ole Miss.

The Ole Miss Alumni Association is offering at $25,000 reward for information leading to an arrest.

When Meredith tried to enter Ole Miss in fall 1962, Mississippi’s governor tried to stop him, and that led to violence on the Oxford campus. U.S. Attorney General Robert Kennedy sent 500 U.S. marshals to take control and days later, Meredith was allowed in the school. Though he faced harassment during his time at the school, he graduated with a degree in political science

Assistant to the Chancellor for Multicultural Affairs Don Cole reiterated the creed that the university stands by.

“This is particularly painful because the James Meredith statue has become a gathering place for students to discuss many things, including the tenets of our creed, which calls for dignity and respect for all people,” he said.

JACKSON – (AP) A federal appeals court has scheduled oral arguments for June 4 in lawsuits challenging the failure of 11 Mississippi counties to redraw supervisor district lines in time for the 2011 election. A […]

The NCAA has issued an official reprimand to University of Mississippi basketball player Marshall Henderson for his conduct following the Rebels’ third-round NCAA tournament game.

After Ole Miss’ season-ending 76-74 loss to La Salle in Kansas City on March 24, Henderson reportedly extended both middle fingers to the crowd as he left the court. Henderson later apologized in a letter posted on Ole Miss’ website.

The NCAA issued the reprimand Wednesday, June 26, saying Henderson’s actions failed to represent the “highest standards of sportsmanship.” The reprimand letter came from Ron Wellman, chairman of the Division I Men’s Basketball Committee and athletic director at Wake Forest. […]