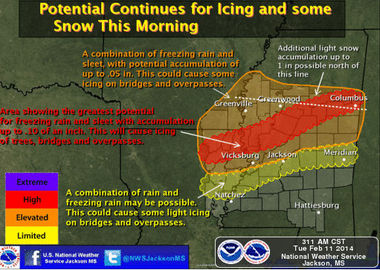 TUPELO, Mississippi (AP) — Slippery roads and bridges are being reported across much of north Mississippi.

The Mississippi Department of Transportation says there are icy roadways in Alcorn and Tishomingo counties Tuesday morning.

The Mississippi Highway Patrol reports that Highway 9 north of Calhoun City is slick as well as the Highway 15 bypass in Chickasaw County and the bridge over the Tennessee-Tombigbee Waterway on Highway 278 in Monroe County near Amory.

The National Weather Service in Jackson said it has received multiple reports of ice beginning to accumulate in Starkville, mainly on plants.

A winter weather advisory remains in effect for parts of the Mid-South until noon Tuesday. Forecasters said the threat for heavy snow has moved east.

Northern Mississippi saw anywhere from a half inch to an inch with some heavier amounts reported around Tippah and Alcorn Counties.

Several schools have closed due to the winter weather, including many school systems in north Mississippi.

Tuesday will be mostly cloudy with a few flurries in north Mississippi during the early part of the day and afternoon high temperatures will be in the low to mid-thirties.

There is another chance of snow or sleet in northern Mississippi for Tuesday night, with low temperatures in the low to mid-twenties.

Mississippi Gov. Phil Bryant declared a state of emergency Monday ahead of the winter storm.

The declaration cleared the clearing the way for state officials to move quickly to respond to problems that could be created by snow or ice.

He’s also delaying the opening of state government offices until 10 a.m. Tuesday in areas expected to be affected by a winter storm, including the Capitol complex in Jackson.

State agency directors could bring in some employees early, as needed, or keep offices closed all day Tuesday, if bad weather persists.

Mississippi, Alabama among a dozen states with anti-sodomy laws

BATON ROUGE, La. (AP) — A dozen states still have anti-sodomy laws on the books 10 years after the U.S. Supreme Court ruled they are unconstitutional. One such state is Louisiana, where gay rights groups […]

Mississippi storm survivors share their stories: ‘We are safe here’

The Associated Press A powerful storm system was menacing a large swath of the South early Tuesday, killing more than two dozen people from Arkansas to Alabama over more than two days of destruction. Here […]