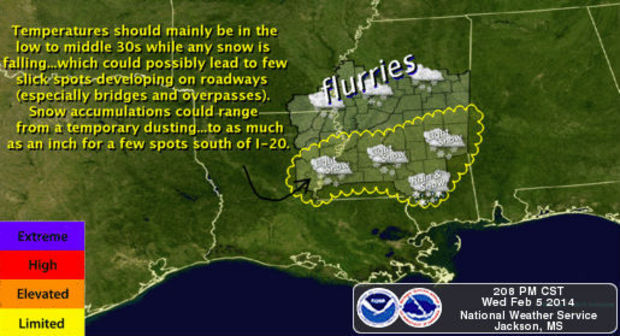 (AP) Mississippi residents in central and parts of south Mississippi could see light snowfall on Thursday.

The National Weather Service said Wednesday that areas along and south of Interstate 20, down to the U.S. Highway 98 corridor, could see snowflakes with up to an inch of accumulation. Areas north of I-20 could see snow flurries and a light dusting of snow.

The Mississippi Emergency Management Agency says the winter conditions could create hazardous driving conditions in some areas, especially on bridges and overpasses.

Forecasters say temperatures in the central part of the state should hover around the low to mid 30s throughout Thursday. Temperatures further south will remain in the low to mid 40s, and areas could see some wintry mix and rainfall.

JACKSON, Mississippi (AP) –Mississippi Gov. Phil Bryant issued an emergency declaration Monday for 36 of the state’s 82 counties to speed up response to a storm that’s expected to bring snow and ice to central […]

JACKSON, Mississippi (AP) — At least one eastbound lane of the Mississippi River bridge on Interstate 20 at Vicksburg, Miss., has reopened. Louisiana State Trooper Albert Paxton says the other lanes should be cleared for […]