By LISA LEFF and TERRY COLLINS 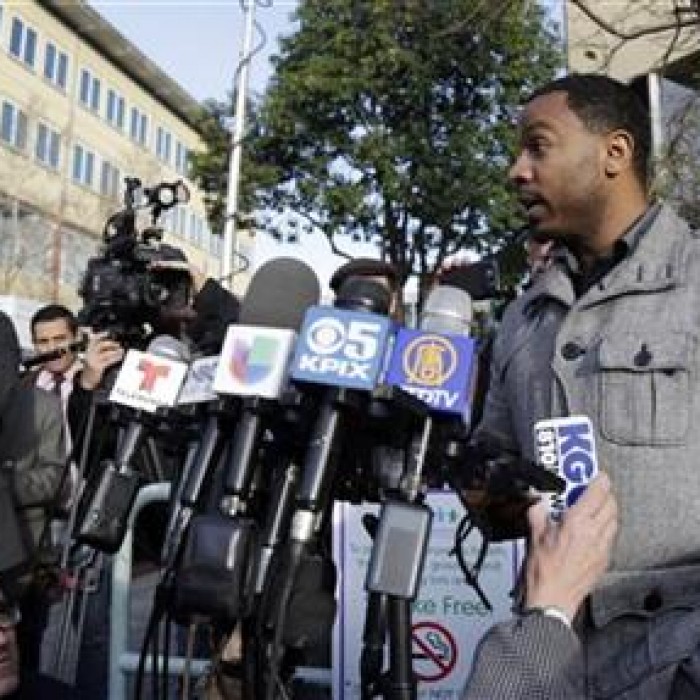 Omari Sealey makes a statement for the media on the condition of his niece Jahi McMath on Monday, Dec. 30, 2013, in Oakland, Calif. (AP Photo/Marcio Jose Sanchez) 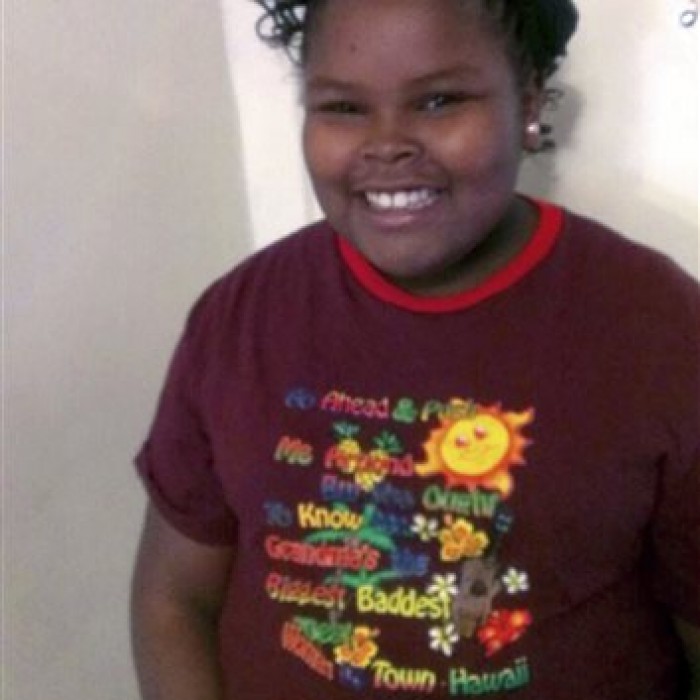 Monday they will sue to keep her on life support. (AP Photo/Courtesy of McMath Family and Omari Sealey, File) 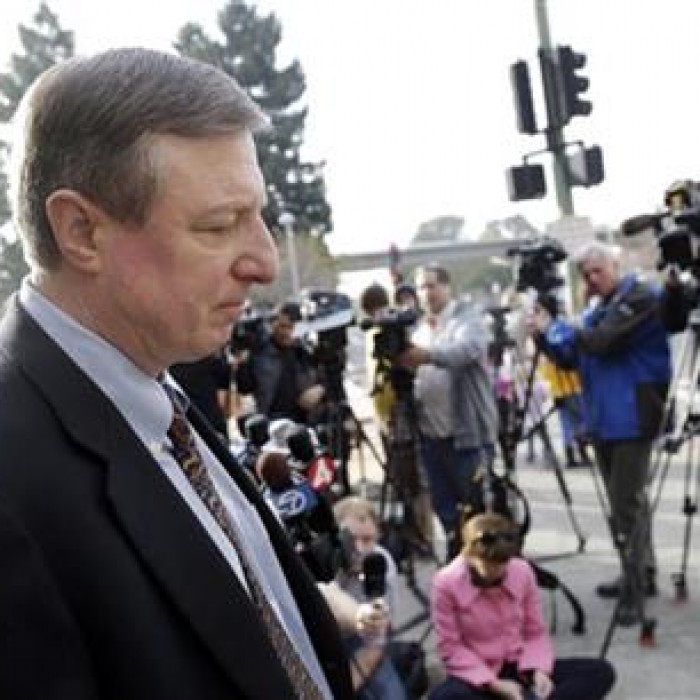 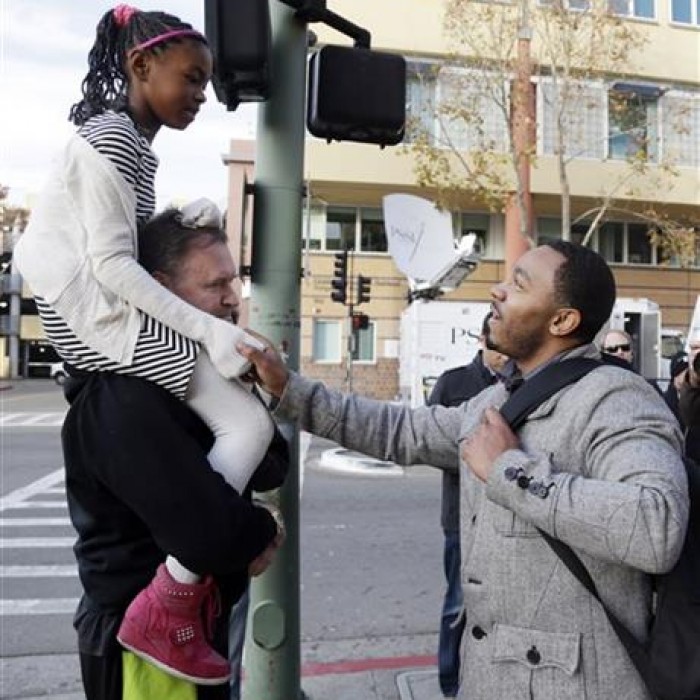 Omari Sealey, at right, shakes hands with well-wishers Frank Somerville, at left, and his daughter Callie, 9, after Sealy made a statement for the media on the condition of his niece Jahi McMath on Monday, Dec. 30, 2013, in Oakland, Calif. (AP Photo/Marcio Jose Sanchez)

OAKLAND, Calif. (AP) — A California girl declared brain dead after tonsil surgery will remain on life support for at least another week after a state judge on Monday extended a deadline.

Jahi McMath’s mother, Nailah Winkfield, hailed the decision as an answer to her prayers and a sign that she has been right to keep fighting for the teen, who doctors have said will never recover.

With television cameras clustered outside the hospital, the family maintained a vigil as the deadline approached.

When Winkfield heard of the judge’s decision to push back the deadline, she wept and hugged relatives outside the hospital.

“Who wants to know the date and the time their child would die?” Winkfield said. “I don’t care what anyone has to say about what I’m doing. … I have to do what is right for me and for Jahi.”

She said she does not believe her daughter is dead because her heart is still beating.

Doctors at Children’s Hospital Oakland want to take her off the machines that are keeping her body functioning. Her family wants to continue life support, saying they have hope she will still pull through.

Shortly before a previous ruling would have allowed doctors to end life support at 5 p.m. Monday, Alameda County Superior Court Judge Evelio Grillo ordered the hospital to keep Jahi on a ventilator until Jan. 7 to give the family time to file a petition in state appellate court.

Grillo’s ruling Monday is the latest twist in a harrowing legal and medical fight that has reignited a heated debate about when life support should end for a severely brain-damaged person.

Also on Monday, the family’s lawyer filed suit in federal court, requesting that the hospital be compelled to perform a tracheotomy for breathing and to insert a feeding tube — procedures that would allow Jahi to be transferred to a facility willing to care for her. The hospital has said it’s unethical to perform surgery on a person who is legally dead.

Sam Singer, a hospital spokesman, said it would comply with the judge’s new order but would oppose any efforts by Jahi’s family to convince a court that she is still alive and entitled to the same rights as a living person.

“We are hopeful we will be successful so this tragedy can end,” Singer said.

He also dismissed claims by Jahi’s relatives that she has shown signs of life, saying any muscle activity was an involuntary muscle reflex.

The family’s lawyer, Christopher Dolan, said when he called Jahi’s mother at the hospital about the extension of the deadline, she said hospital staff had cleared family members out of a waiting room as doctors prepared to remove Jahi from the ventilator.

“He’s giving us a meaningful opportunity to seek relief and what I consider a stay of execution,” Dolan said of the judge’s ruling. “I feel like I’m a death row lawyer, and it does not feel good.”

The attorney said he knows he has been widely criticized by some for giving the girl’s family a false sense of hope. But he said, “I am fighting for the right of parents to direct the health care of their child and for them to make the choice.”

Doctors at Children’s Hospital and an independent pediatric neurologist from Stanford University have concluded Jahi is brain dead.

She underwent a tonsillectomy at the hospital Dec. 9 to treat sleep apnea and other issues. After she awoke from the operation, her family said, she started bleeding heavily and went into cardiac arrest. Then she was declared brain dead three days later.

In a declaration filed with the federal action by Jahi’s family, Dr. Paul Byrne, a pediatrician who has questioned the definition of brain death, said he visited Jahi’s bedside and observed her responding to her grandmother’s voice and touch with a squirming movement.

“In my professional opinion, she is not a cadaver,” Byrne said. “Her heart beats thousands of times a day.”

The family’s court filings said the New Beginnings Community Center in Medford, N.Y., is willing to take Jahi and provide 24-hour medical care. The facility’s management could not be reached for comment Monday night.

Arrangements also have been made, according to the documents, with an air ambulance company for a doctor to accompany Jahi on a private jet from Oakland to Long Island for $27,950.

By Monday night, the family’s fundraising website had raised more than $29,000 for a possible transfer.

Dolan said in a phone interview that he has also been in talks with a facility in Arizona because the family would like to keep Jahi as close as possible.

Earlier, Singer, the hospital spokesman, reiterated the position of its doctors.

“This is one of the most tragic situations imaginable,” Singer said. “A family has lost their young daughter. But unfortunately, Jahi is deceased. No amount of hope, prayer or medical procedures will bring her back.”

Hospital spokeswoman Cynthia Chiarappa has said officials would have to understand the capabilities of the New York facility before allowing a transfer. The hospital also said it would need to confirm there is lawful transportation included in any transfer plan and there is written permission from the coroner.

FORT WORTH, Texas (AP) — The family of a brain-dead, pregnant Texas woman said Sunday afternoon that she has been removed from life support following a judge’s ruling that a Fort Worth hospital was misapplying […]

By TERRY COLLINS  OAKLAND, Calif. (AP) — Acting with a court order, the family of a 13-year-old California girl declared brain dead after a tonsillectomy has had her taken from a California hospital to be cared […]