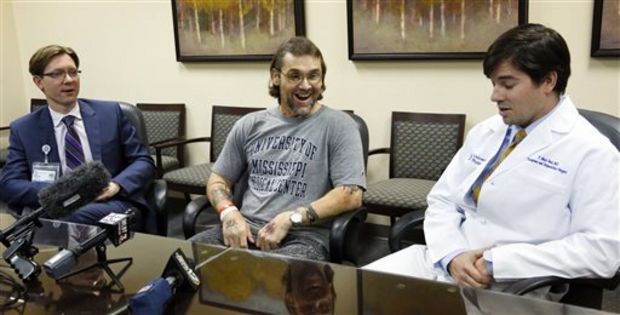 Organ recipient Paul Davis of Monticello, center, laughs as he speaks to Dr. Mark Earl, right, an assistant professor of transplant surgery, who was part of the team that performed the kidney and pancreas operations on Davis, during a news conference Friday, Dec. 13, 2013, at the University of Mississippi Medical Center in Jackson, Miss. Doctors at the medical Center performed the facility’s first pancreas transplant in the 49-year-old diabetes patient, who also received a kidney during the procedure. (AP Photo/Rogelio V. Solis)

JACKSON, Mississippi (AP) — Doctors at the University of Mississippi Medical Center have performed the facility’s first pancreas transplant in a 49-year-old diabetes patient who also received a kidney during the procedure.

Organ recipient Paul Davis of Monticello said during a news conference Friday that he has suffered from Type 1 diabetes since he was 9 years old and lost six toes to the condition. He also described numerous car accidents and encounters with police over the years who thought he was drunk due to disorientation from low blood sugar.

Davis said he had so many problems that he had the diabetes medical alert symbol tattooed on his left hand. Now, he looks forward to a life free of dialysis, insulin therapy and the need to watch everything he eats and drinks.

“It’s a life-changing experience,” Davis said, wearing a UMMC shirt in a conference room at the Jackson hospital.

Dr. Mark Earl, an assistant professor of transplant surgery who performed the operation on Dec. 5, said it was the first time a pancreas had been transplanted at the hospital and now others who need similar transplants won’t have to leave the state.

Earl said Davis routinely exercised and took care of himself, which made him an ideal candidate for the operation.

It was also the first time the hospital transplanted five organs — heart, liver, two kidneys and pancreas — from the same donor, which went to four patients, said Kevin Stump, executive director of the Mississippi Organ Recovery Agency. The lungs from that donor went to a recipient out of state.

The hospital has a history of groundbreaking work in transplants. The first human lung transplant was performed there as was the first animal-to-human heart transplant when a chimpanzee heart was put into a man, said hospital spokesman Jack Mazurak. Both of those operations happened about 50 years ago.

The pancreas produces insulin and several other hormones. The hormones help the body regulate blood sugar and pancreatic enzymes break down carbohydrates, protein and fats.

Dr. Kenneth Kokko, associate professor of nephrology and renal transplant program medical director, said in a statement that the pancreas will prolong the life of the patient’s new kidney.