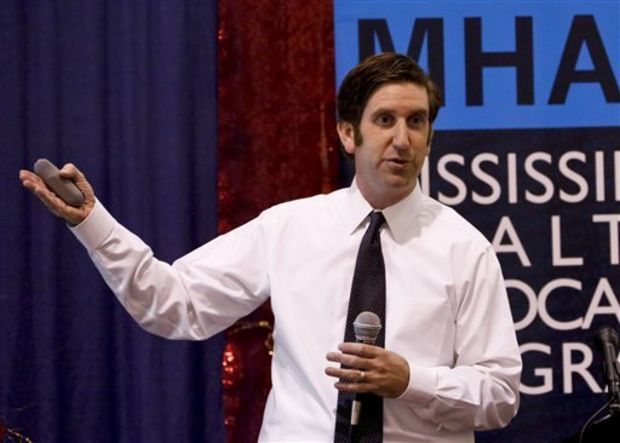 David Becker of the University of Alabama Birmingham School of Public Health, explains the implications of an economic analysis of the input of Medicaid expansion in Mississippi, Thursday, Dec. 12, 2013, in Jackson, Miss., during the study’s release by the Mississippi Health Advocacy Program. According to the study by the nonprofit group, by passing up the expansion of Medicaid, Mississippi is passing up billions of dollars in potential economic activity. In addition, not expanding Medicaid could cost 20,000 new jobs in the state over the next several years. (AP Photo/Rogelio V. Solis)

JACKSON, Mississippi (AP) — Mississippi is losing billions of dollars in potential economic activity because state leaders, so far, have chosen not to extend Medicaid to hundreds of thousands more people, a nonprofit group said a report Thursday.

Mississippi Health Advocacy Program, which supports wider availability of medical coverage, said Medicaid expansion in the state would generate more than $14 billion in new economic activity, create about 20,000 new jobs and provide a net increase of $848 million in state and local tax collections.

That’s based on a scenario of 217,000 people being added to Medicaid from 2014 to 2020 — the middle level in a study that also presented numbers for higher and lower levels of new enrollment.

“By refusing to expand Medicaid, our state leaders are costing our cities and counties thousands of new jobs and economic activity,” said Roy Mitchell, director of the health advocacy program.

Medicaid is a federal-state health insurance program for needy, aged, blind and disabled people and for low-income families with children.

Under the health overhaul that President Barack Obama signed into law in 2010, states have the option to extend Medicaid to people earning up to 138 percent of the federal poverty level. That’s about $26,950 for a family of three.

In Mississippi now, a family of three can earn no more than about $5,600 and qualify for Medicaid. Many low-income childless adults don’t qualify at all.

The 2010 law says the federal government would pay 100 percent of medical expenses for newly qualified Medicaid enrollees from 2014 to 2017. The federal share would be reduced to 90 percent by 2020, with each state paying the balance.

The health advocacy program report was researched and written by two professors from the University of Alabama at Birmingham, who analyzed a wide range of statistics, including those for health care spending and employment.

One of the professors, David J. Becker, said that come January, Mississippi will miss the first year of federal money it could’ve received with expansion.

“That’s the sweet part of the deal — years one, two and three,” Becker said.

About 644,000 of the Mississippi’s nearly 3 million residents are already enrolled in Medicaid.