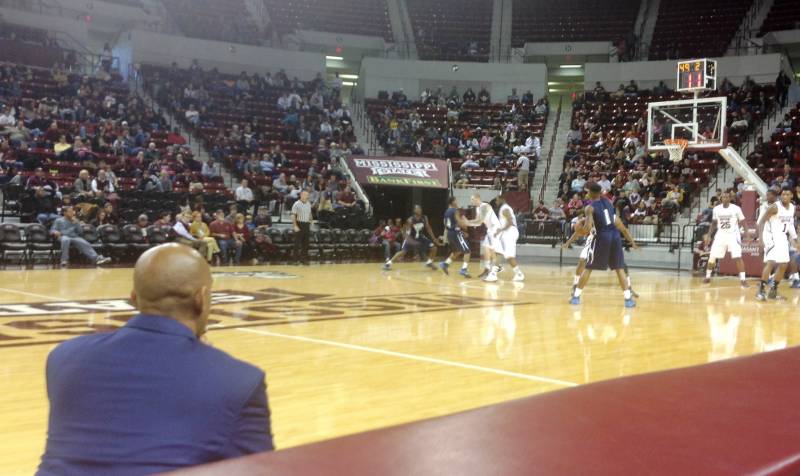 STARKVILLE, Mississippi (AP) — Craig Sword scored a team-high 12 points and Mississippi State survived a scare from Jackson State Wednesday at Humphrey Coliseum but held on for a 58-56 victory.

Sword had six of his 12 points in the final four minutes. MSU (4-1) also received 11 points each from Fred Thomas and Roquez Johnson.

“We didn’t approach the game like we were supposed to and we came out playing soft,” said Sword. “We kept taking a lot of threes and that’s not our game. In the second half after Coach wore us out in the locker room, we came out and played our game.”

Sword scored all 12 of his points in the second half and also had five rebounds.

The Bulldogs missed 11 of their first 13 shots and Jackson State claimed a quick 7-0 lead in the opening minutes. MSU’s shooting didn’t improve much the rest of the half as the Tigers held a 28-23 halftime advantage.

“I thought Jackson State did a real good job of packing it in and making us shoot threes,” said MSU head coach Rick Ray. “We changed that in the second half and I gave a mandate to our guys that if you shoot a three you are coming out of the game. Only time you could shoot a three was under five seconds on the shot clock. We attacked the rim and it really paid a difference.”

MSU shot just 28 percent in the first half and Jackson State wasn’t much better at 37 percent.

The Tigers did control the boards for much of the first half and grabbed the first nine rebounds of the game. MSU also had 10 first-half turnovers.

The Bulldogs did end up out-rebounding the Tigers 33-32 but had 19 turnovers for the game and just 20 made field goals.

Jackson State (2-5) had a shot to win the game at the final buzzer but Julysses Nobles’ 3-point attempt fell short.

Neither team led by more than seven points the entire game. The game was tied nine times and also had nine lead changes. MSU took the lead for good with 3:05 left in the game following a Colin Borchert bucket in the post.

Nobles was 8 of 21 from the floor and 6 of 9 at the free throw line. Brandon West also finished in double digits for Jackson State with 10 points.

MSU sophomore center Gavin Ware entered the game averaging 16.5 points and 11.9 rebounds but finished with just four points and seven boards. It marked Ware’s first game of the season to not register a double-double.

The school announced that David Turner will be in charge of the defensive line while two-time Super Bowl winner Deshea Townsend will lead the cornerbacks.

Turner returns to Mississippi State, where he coached the defensive line from 2007-09. He has spent the past three seasons as an assistant at Kentucky and has more 13 years of experience in the Southeastern Conference. […]

JACKSON – (AP) Mississippi State coach Rick Stansbury felt like a torn parent when two of his players – Dee Bost and Arnett Moultrie – were named finalists for the Howell Trophy. Only one of […]

JACKSON – (AP) A post-conviction petition by Mississippi death row inmate Willie Jerome Manning was filed too late to be heard in state courts, a federal appeals court panel has ruled. A three-judge panel of […]