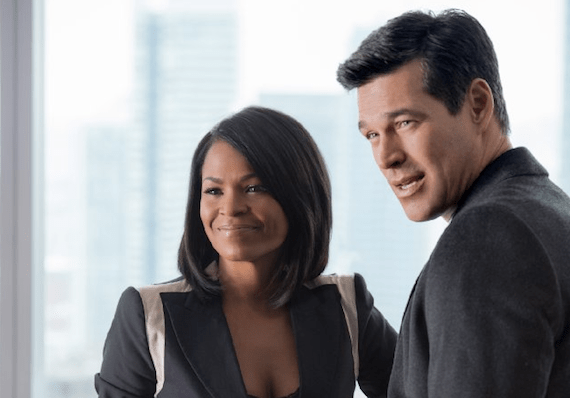 In “The Best Man Holiday,” Jordan, Nia Long’s character, gets grief for “dating a White boy” from her old friend Harper (played by Taye Diggs).

His initial reaction, whether jokingly or not, is similar to many in real life when they learn that friends are dating outside of the race.

But the decision to have her character be involved in an interracial relationship came from Nia Long herself.

“I thought it would be nice to add a little salt to the pepper. A little cream to the coffee,” Nia told MadameNoir.com on the decision to bring on Eddie Cibrian as Brian, Jordan’s love interest. “They meet because of the social worlds that they’re in and it works,” Nia said, framing how she and her on-screen beau came together. “When something works you don’t judge it based on what package it comes in. You judge it on how it makes you feel and if it works for your life.”

Long offers that its 2013, and this is simply a sign of the times. Blacks dating and marrying whites are no longer isolated incidents, its commonplace, so why shouldn’t movies reflect that without the stigma of slighting black men or women.

“We’re living in a modern world where it happens and it’s OK and it’s no disrespect to any black man,” Nia stated. “I love black men, but the reality is the sistas are marrying white men and the brothas are marrying white women and that’s the world that we live in. And it’s not to be judged, and I think if it works for you then embrace it.”