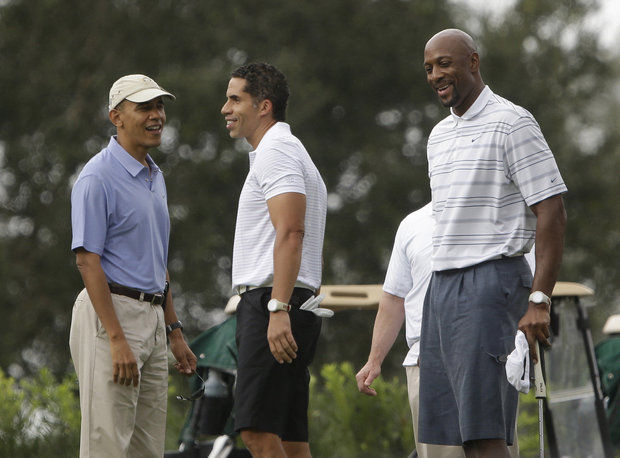 FORT LAUDERDALE, Fla. — Despite sporadic fall showers and the muggy Florida sun, President Barack Obama hit the greens Saturday with a former NBA star at the ritzy golf club where “Caddyshack” was filmed.

In South Florida for a trio of fundraisers the night before, Obama traveled north from Miami to Fort Lauderdale, where he joined former basketball player Alonzo Mourning at the Grande Oaks Golf Club.

The name of the private, 18-hole course has changed over the years, but “Caddyshack” fans will remember it as the site where Bill Murray, Chevy Chase, Rodney Dangerfield and a rambunctious gopher got into all kinds of antics in the 1980 comedy flick.

Nearly three hours after he arrived, Obama was spotted behind the wheel of a golf cart, with Mourning in the passenger’s seat, cruising along near the ninth hole. The White House said former U.S. Trade Representative Ron Kirk, a frequent Obama golf partner, and Cyrus Walker, the cousin of senior presidential adviser Valerie Jarrett, rounded out the weekend foursome.

An avid golfer, Obama rarely goes a weekend without teeing off, occasionally inviting big-name celebrities to join. Earlier this year, Obama caused a stir when he golfed at another exclusive Florida sport club with Tiger Woods.

Obama arrived in Miami Friday evening after touring a port in New Orleans, where he pitched infrastructure spending as a way to boost U.S. exports.

After wrapping up his golf game, Obama was to return to Washington on Saturday afternoon.