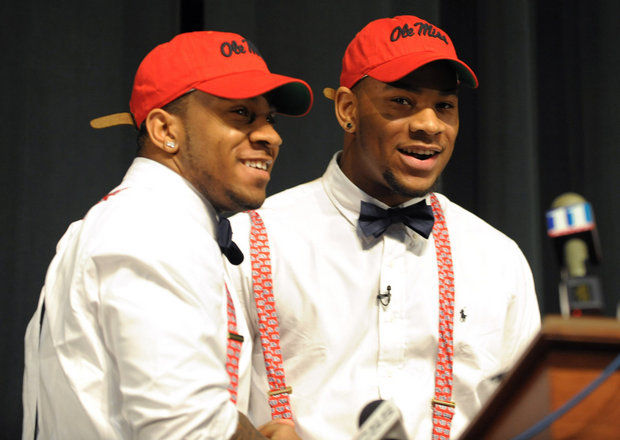 OXFORD, Mississippi (AP) — When highly-regarded recruit Robert Nkemdiche joined his brother Denzel at Ole Miss , the two had plans of forming the core of the Rebels’ defense.

Because of injuries, that hasn’t happened yet.

But both are expected to be on the field Saturday, when Ole Miss (5-3, 2-3 Southeastern Conference) hosts Arkansas (3-6, 0-5) at Vaught-Hemingway Stadium. And the Rebels hope that will make them a much more formidable group through the final month of the season.

Arkansas has lost six straight games, but ranks third in the SEC with 211.2 yards rushing per game.

Robert Nkemdiche was one of the nation’s premier recruits and has already had an impact on the Rebels’ defensive line. The 6-foot-5, 294-pound true freshman has 15 tackles this season, including four for a loss, despite missing the past two games with a hamstring injury.

Denzel Nkemdiche injured his knee in the season opener against Vanderbilt and hasn’t been fully healthy since. The 5-foot-11, 207-pound sophomore has 26 tackles in five games.

The Rebels are coming off a bye week, which has allowed several players the chance to get healthy, including cornerback Mike Hilton and defensive tackle Issac Gross.

The Ole Miss defense has played well over the past month despite missing several starters. The Rebels have won two straight, including a stunning 27-24 win over then-No. 6 LSU three weeks ago.

Several players who were once buried on the depth chart stepped up and made contributions during those wins.

“That’s one of the more rewarding things of coaching, probably,” Freeze said. “When you see a kid you didn’t count on, but he got his chance and he made the most of it.”

“We still have a lot of things to play for,” Arkansas quarterback Brandon Allen said. “There’s still that bowl opportunity that we’re striving for. We know we have to take every game at a time and then win every game. There are still things that this season still has for us to go get.”

Here are five things to watch when Mississippi hosts Arkansas on Saturday:

OLE MISS GETTING HEALTHY: The Ole Miss football team — specifically the defense — has been a banged-up bunch through most of the season. But the Rebels are getting healthy for the home stretch. Defensive end Robert Nkemdiche returns after missing two games with a strained hamstring and his brother, linebacker Denzel Nkemdiche, is finally close to full strength after being hobbled by a knee injury for much of the season.

STOPPING THE RUN: There’s no secret about what Arkansas likes to do on offense. The Razorbacks are third in the Southeastern Conference with 211.2 yards rushing per game, but dead last in yards passing. Ole Miss hopes improved health among its defensive line and linebackers will allow the Rebels to slow the Razorbacks.

EFFECTIVE WALLACE: Ole Miss quarterback Bo Wallace is quietly having another solid season in his second full year as the starter. The junior has thrown for 1,976 yards, 11 touchdowns and only three interceptions. He’s been helped by an effective running game that includes veteran Jeff Scott and sophomores I’Tavius Mathers and Jaylen Walton.

ENDING THE MISERY: It’s been a tough stretch for Arkansas, which has lost six straight games under first-year coach Bret Bielema. The Razorbacks showed a little more life in last week’s 35-17 loss to Auburn after being blown out by a combined score of 104-7 in the previous two weeks against Alabama and South Carolina.

BOWL OPPORTUNITIES: Ole Miss needs a victory to qualify for a bowl game for a second straight season. The Rebels were also 5-3 at this time last season, but lost the next three before beating Mississippi State in the Egg Bowl to finish the regular season 6-6. Arkansas must win its final three games to gain bowl eligibility.