By David Stokes/NNPA
Special To The Mississippi Link 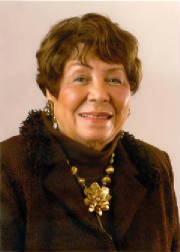 After suffering a massive stroke and its debilitating effects for over a week, Mrs. Evelyn Gibson Lowery, wife of civil rights leader Rev. Joseph E. Lowery, and founder and board chair of SCLC/WOMEN (Women’s Organizational Movement for Equality Now), Inc., died last week in her southwest Atlanta home upon leaving a local hospital after doctors asserted there was nothing more medically that could be done for her.  In a statement from the Lowery family, Rev. Lowery indicated, “My beloved Evelyn was a special woman whose life was committed to service, especially around issues of empowering women.  She was a wonderful mother and wife, and I thank God that she didn’t suffer any pain, and that I was blessed having her as my partner, my confidante and my best friend for close to 70 years.”  He continued, “I will miss her each and every day, but as a man of faith, I know that she is with her God.  My entire family has been overwhelmed by the continuous outpourings of love, support and prayers that have come from across the country, and we ask for your continued prayers over the next few days.”
For more than one-half century, Mrs. Lowery assisted in advancing the cause of women and the African-American family unit, in particular, as well as mankind, in general, alongside her husband within the civil rights movement’s era that began in 1955 Alabama.  Throughout the ’50s, ’60s and ’70s, Mrs. Lowery championed the cause and promoted women’s rights within the movement, as well as worked alongside her husband with the Atlanta-based Southern Christian Leadership Conference (SCLC).
Although SCLC/WOMEN, Inc. was formed in 1979, Mrs. Lowery, 16 years later in 1995, led in the rehabilitation of the present SCLC/WOMEN’s headquarters where she coordinated various programs and initiatives to benefit women and the family unit, as well as remember stalwart activists who rendered the ultimate sacrifice for the cause of justice and equality within the movement.  Mrs. Lowery will forever be remembered as the creator of several signature initiatives, including SCLC/WOMEN’s annual “Drum Major for Justice” awards dinner, held every April 4, in commemoration of the life and legacy of the Rev. Dr. Martin Luther King, Jr., to recognize individuals of various professions carrying out the objectives of Dr. King of justice, equality and peace.  The annual awards dinner was initially presented in 1980.  Another annual event was the Evelyn Gibson Lowery African-American Civil Rights Heritage Tour, held every first weekend in March.  The Heritage Tour is a weekend junket by students, led by Mrs. Lowery, to learn of various civil rights sites throughout Alabama in which activists held to advance the cause of freedom and justice, as well as acknowledge those activists who rendered their lives which ultimately led to the historic Voting Rights Act of 1965.
As funeral arrangements are pending (at presstime), contributions, in Mrs. Lowery’s name, can be sent to SCLC/WOMEN, Inc., 328 Auburn Avenue, NE Atlanta, Ga., 30312, which will assist within the upcoming group’s event, Pampering For Peace, the event to support women in local domestic violence shelters.  In January 1998, as her husband retired as the longest serving president/CEO of SCLC, Mrs. Lowery remained on guard as SCLC/WOMEN’s leader, ready to continue the work “that was left to do.  There is much more to be accomplished; so many successes have taken place over the years, yet, so many more are still coming.  We must remain on course, stand and work vigilantly, and witness the rewards of our labor for the cause of freedom, justice and peace,” Mrs. Lowery said at the time.
Mrs. Lowery, age 88, was the mother of Yvonne, Karen, Cheryl, respectively, as well as a loving grandmother and great-grandmother — and friend to all who supported and worked for the cause of peace, justice and equality.

Stamp honoring Rosa Parks to be released next month

Just in time for Black History Month, a stamp honoring the mother of civil rights, Rosa Parks, will be unveiled on what would have been her 100th birthday – Feb. 4 in Detroit.

Parks’ refusal to surrender her seat to a white passenger on a bus during the days of segregation in Montgomery, Alabama, spurred a city-wide boycott that lasted about 381 days. Parks stand also introduced a young newcomer, Martin Luther King, Jr., to the fight for civil rights.
[…]

By Janice K. Neal-Vincent Contributing Writer Since its 1954 origin the Civil Rights Movement frequently visits and rests upon America’s conscience. Equally, the rise of the Rev. Dr. Martin Luther King Jr. as its charismatic […]