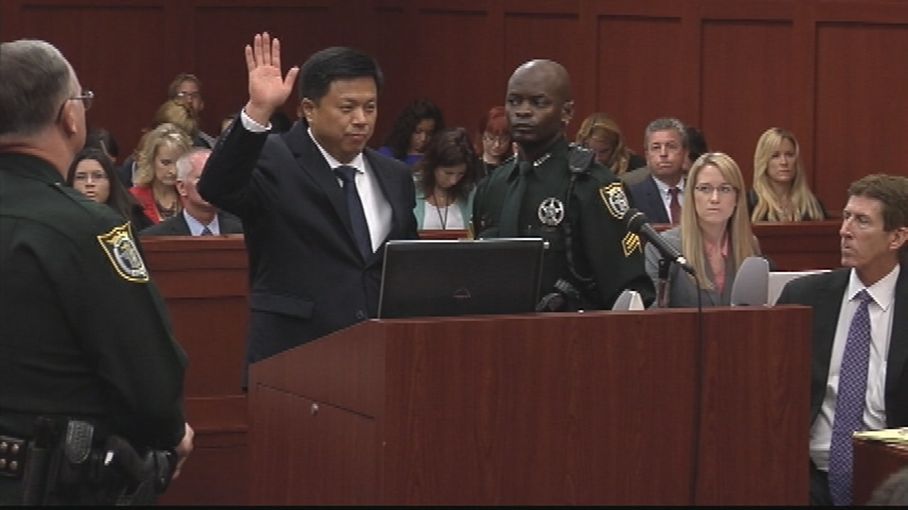 According to WFTV.com, Florida medical examiner Shiping Bao claims that Florida state prosecutors were biased against Trayvon Martin and purposely threw the case. He is suing the state for $100 million.

Bao’s allegations come swiftly on the heels of him being fired from his position as associate medical examiner, a position earning him $176,000 per year.

“I believe it is my opinion that Trayvon Martin was in a lot of pain, and that he was suffering,” Bao said July 5 during testimony in the George Zimmerman trial.

On the stand, Dr. Bao changed his testimony about key statements he’d made and said he’d changed his mind about Martin only being alive for as many as three minutes after the shooting.

“I believe he was alive one to 10 minutes after he was shot. His heart was beating until there was no blood left,” Bao said.

Through his high-profile attorney, he claims the medical examiner, state attorney’s office, and Sanford Police Department were all biased against Martin.

“He says their general attitude was that he got what he deserved,” Attorney Willie Gary said.

Gary said Dr. Bao was made to be a scapegoat and was wrongfully fired from the medical examiner’s office. He said his client was prepared to offer proof that Martin was not the aggressor.

“He was in essence told to zip his lips. ‘Shut up. Don’t say those things,'” Gary said.

“He wanted a question that would have allowed him to explain to the jury with scientific evidence how there was no way Trayvon Martin could have been on top of George Zimmerman,” Gary said.

News-journalonline.com reports that another Bao attorney, Victor Swift said on Tuesday that Bao had eight points he wanted to make during the trial but was blocked by prosecutors from State Attorney Angela Corey’s office of the 4th Judicial Circuit in Jacksonville. Swift said Bao wanted to testify that Martin was not on top of Zimmerman. He also wanted to say that the amount of marijuana in Martin’s system would have made him less aggressive.

Although he is said to be in hiding after his acquittal in the shooting death of Florida teen Trayvon Martin, trouble for George Zimmerman appears to be far from over.

The Justice Department said Sunday that it was restarting its investigation into Martin’s death in 2012 to consider possible separate hate crime charges against Zimmerman.

Zimmerman, the neighborhood watch volunteer who shot Martin was acquitted of all charges by a jury late Saturday. […]

ORLANDO, Fla. – (AP) A grand jury Lanzamiento De Curso De Forex will not look into the Trayvon Martin case, a special prosecutor said Monday, leaving the decision of whether to charge the teen’s shooter […]

Nearly three months after the battered body of Clarksdale, Miss., mayoral candidate Marco Watson McMillian was found dumped in a field, his parents have partnered with Daryl Parks, the Florida-based civil rights attorney in the Trayvon Martin case.

On Feb. 27, Marco’s naked body was found on a levee near the Mississippi River between the towns of Sherard and Rena Lara, Miss. – some 25 miles from Clarksdale. Autopsy reports released this month revealed that the 33-year-old had been strangled, beaten, set on fire and dragged.

Desperately seeking answers, Marco’s parents, Amos and Patricia Unger, held a press conference at their home in Clarksdale this month, hoping to uncover the events leading up to their son’s death and to determine: If the suspect in custody acted alone; if Marco’s death was a hate crime because he was gay or if his death was politically motivated because he was running for mayor. […]