NEW ORLEANS — Sean Payton’s return to the sideline is one game old and already the Saints are celebrating a dramatic victory over a presumed title contender.

They’re alone in first place, too.

Drew Brees passed for 357 yards and two scores, Roman Harper intercepted Matt Ryan’s tipped fourth-down pass in the end zone, and New Orleans held on for a 23-17 victory over the Falcons on Sunday.

“I was hoping our defense would pull one out, and man, did they ever,” Brees said.

Last season, while suspended in connection with the NFL’s bounty probe, Payton watched helplessly from afar as the Saints fielded one of the worst defenses ever, yielding a single-season record 7,042 yards. One of his first moves upon reinstatement was to hire Rob Ryan as defensive coordinator.

Payton put the new product on the field right away, electing to kick off when the Saints won the coin toss.

“Sean sent the defense out first, which you would never have seen in the past,” Harper said. “So just a whole different feel and the things that we’re trying to accomplish, this is just one step in the right direction.”

Brees’ first touchdown went to Marques Colston, who made a diving, 25-yard snag for his 533rd catch, setting a franchise record.

“That’s just vintage Marques Colston,” Brees said. “I have so much trust and confidence in him. He knows the ball’s coming to him and he’s going to make that play.”

Brees also hit tight end Jimmy Graham for a 7-yard score in the third quarter to give the Saints the lead for good.

“It was just important to get the first win,” Payton said. “You try to compartmentalize each week, each game, and we played a good team. … We fought hard, especially late.”

New Orleans’ day got even better when Tampa Bay and Carolina lost, leaving the Saints atop the NFC South.

Atlanta’s Ryan passed for 304 yards and touchdown passes to Tony Gonzalez and Julio Jones. In the final three minutes, Ryan quickly drove Atlanta to the Saints 3 before the New Orleans defense stiffened.

“When we play the Saints, it’s usually hard-fought, and it turned out that way again,” Atlanta coach Mike Smith said. “We have to protect the quarterback a lot better.”

Steven Jackson rushed 11 times for 77 yards in his Atlanta debut, including a 50-yard run.

Ryan was sacked three times — by Junior Galette, Akiem Hicks and Parys Haralson — and threw balls away several times, including on an early third down that forced Atlanta to settle for a field goal.

The group also produced a momentum-changing turnover when Malcolm Jenkins stripped Jones and Harper recovered, setting up Colston’s TD, which tied the game at 10 in the second quarter. 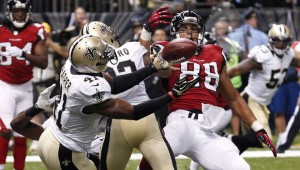 Douglas caught four passes for 93 yards, including a 20-yarder to the New Orleans 7 on Atlanta’s final drive. But that turned out to be Ryan’s last significant completion on a drive which started with connections of 17, 16, 7 and 13 yards.

On third-and-goal, Ramon Humber broke up a pass for Jackson at the goal line.

“I dropped the ball,” Jackson said. “It wasn’t the easiest catch, but I’m not a person to make excuses.”

Then rookie safety Kenny Vaccaro tipped Ryan’s fourth down pass for Gonzalez in the end zone and Harper dived to catch it before teammates piled on him while the Superdome crowd erupted.

“The ball was up in the air and I liked my chances, but we were just a fingertip away,” Gonzalez said. “So for that, give them credit.”

Smith said the drive was well-executed “until we got inside the 10-yard line. … The final play is going to be analyzed 5,000 times in the next three days.”

Fans stood and cheered passionately as Payton held up Gleason’s arm with his left hand and held up his own right arm, then lowered both to initiate the chant by fans eagerly awaiting a matchup between the past two teams to win NFC South.

It didn’t translate to a good start for the home club, though.

The Falcons struck for the first big play on Douglas’ 50-yard catch and run to the New Orleans 10, setting up Ryan’s 7-yard TD pass to Gonzalez.

Atlanta later stuffed running back Mark Ingram on fourth-and-short near midfield, and quickly drove for a short field goal and a 10-0 lead. Garret Hartley’s 48-yard field goal in the second quarter made it 10-3.

New Orleans then went up 13-10 on a short field goal set up by rookie Kenny Stills’ 67-yard catch, and that score stood until halftime.

Notes: Saints NT Brodrick Bunkley (right leg), DE Tyrunn Walker (left leg) and CB Patrick Robinson (undisclosed leg injury) all left the game. Payton did not provide updates on their condition. … Atlanta has lost seven of eight in New Orleans since Payton became coach and lost a season opener to New Orleans for the first time ever after winning the first six.

NFL: Saints vs. Panthers should make for second-half intrigue in NFC South

November 7, 2013 Online Editor Sports Comments Off on NFL: Saints vs. Panthers should make for second-half intrigue in NFC South

The Associated Press A few weeks ago, the New Orleans Saints were unbeaten and appeared to be on the verge of running away with the NFC South. They remain atop the division at the halfway […]

March 23, 2015 Online Editor Sports, The Buzz Comments Off on Ex-NFL safety Darren Sharper charged with rape in Vegas after being accused in 3 other states